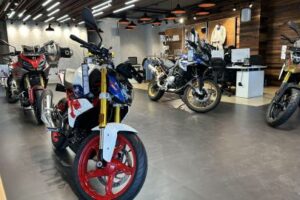 Overall these guys gave me one of the best service experience with bikes so far.

BHPian Jaggu recently shared this with other enthusiasts.

There is a new dealer for BMW Motorad (2 wheelers) in Bangalore and I had chance to visit them and experience the service support recently. For a change it was a very good experience and thought I should share it here on the forum.

As you are aware I had picked up a GSA 1200 about 2 years back (story here). As soon as I got the bike I got it checked at a private garage owned by a rider in Jayanagar, got the shaft assembly cleaned up and lubed. Then came the time to do the annual service (end of last year), and had got it done at Tusker BMW who were the sole dealer in Bangalore. It was a minor service with just oil change, so I went ahead with them inspite of horror stories about the dealership. Obviously just like any rude and bad dealer they won’t allow owners to hang around while service is being done  had already decided that next service which is a major one, will be done at one of the other city dealers who had better repute and service standards.

The 390 Adventure and the GSA were doing my daily duties till August of this year, so Chaggu the GSA had done hardly 1000 kms since service. August made some plans with few close friends to ride the hills and decided to ship the 390 adventure to Noida. Dear friend and fellow mod khan_sultan is baby sitting the bike these days, since I plan to do few more rides up there before shipping her back to Bangalore. So now Chaggu has been a daily ride for me since Sep, and I was enjoying the bike…. till that fateful day in October beginning when I started the bike and it flashed “Engine control failure” on the TFT and went into limp mode!

I have the scan tool and OBD connector, so rigged it up and did a check. Errors pointed out to a faulty throttle control unit at the handle bar. Tried clearing codes, resetting it and an adaptation, but the bike just wouldn’t come out of limp mode. While doing adaptation I could see that the throttle controller at max is going only till about 12%, which kinda confirmed it is conked. Now this is a known fault in the newer GS/A 1250 and there were no questions asked replacements. But never knew issue is there for the older models also. I had seen the news of another recall for a modification to be done for the drive shaft (news here), but that also did not have any mention about throttle control unit. Anyhow it was double bad news for me, since I did not have a spare vehicle that I can use, it was holiday season (puja) and call to Tusker enquiring about the availability of the part was a damp squib at best. They said they ‘will get back’ and no estimated timeline was committed since it was just after holiday season! Oh ya this part would cost about 25,000 INR that much info I could gather, and I was informed I would get a call back as soon as part arrives. It’s been more than 1.5 month since then and I still am waiting for a call from Tusker BMW!

I knew relying on Tusker is a bad idea and went looking for help in couple of biker groups. Adventure Bike Rider group is one which has many GS/A riders and prompt came replies with contacts of other dealerships, used part, new part etc. I knew it is a simple fix and I have the software to do the changes at ECU, so was about to go ahead with procuring the part from someone in Bangalore. But before this I thought I will just check with the garage I mentioned in the beginning (owned by a rider), if I am on the right track. And this person confirmed this is a known issue and part replacement is the way to go, but he prompted me to check with the dealer if this can be covered under warranty since it is a known issue. Now here is the catch: 1- warranty ended in Dec since the previous owner did not get the extended warranty at purchase and BMW does not sell extended warranty later. ps: Now they do, there is a special scheme running where bikes still under original warranty can upgrade. 2 – The very thought of dealing with Tusker who could not confirm on part and related eternal waiting period ahead.

This is when someone from Bangalore Tiger group reminded me that there is a new dealer in town and close by for me in Koramangala and shared the contact persons number. Then another member from Adventure Rider Group sent me his reliable contact at JSP and asked me to check with him if my bike can be covered under recall. Messaged the JSP person Shashank and he said he will check on the part availability and if my bike is covered under the recall. He also mentioned there is already a wait list for people but will try his best. Oh yeah I came to know there is a silent recall that is happening for throttle control unit, that happens when you take the bike for service. Came to know through the contact for used part. The part I was offered was one such unit that was replaced but not yet failed. I had made the call in the evening and next day by afternoon Shashank replied back and confirmed that my bike is on the recall list and it will be free of cost! Also that the part is expected in next few days and he will revert to me as soon as it arrives. Since my bike was in limp mode and I explained my no vehicle situation, he fast tracked my vehicle for the recall. Within few days I got message that part has arrived and I can drop the bike next day. I assumed this job would take couple of days (from my experience dealing with Tusker attitude), but was surprised when the service advisor Varun told that I can come and pick the bike up by evening. Inspite of me adding a small list of other minor jobs.

By evening I got a call and was informed the rear pads are worn and need replacement at 12,000 kms!. I had a set of OE pads with me, so I informed I will carry it when I take delivery and get it replaced. Went to the workshop by evening and that is when I saw the service set up these guys have. A very nice waiting area with view to the service, so OCD’s like me can hang around and watch while bike is being serviced!  By mistake I took one set of front brake pads instead of the rear and they had already billed the labor. Varun assured that I can just get the pads next day and can get it replaced in couple of minutes, to which I agreed and have got it done by now.

Finally met up with Shashank and he took me around the showroom. So this is a BMW Motorad experience centre and not a typical dealer set up. As per him there are about 13 world wide and the first one in India (impressive). No wonder the massive sq foot area, spread over two floors and a great service Bay Area also. Now I will let the pictures do the talking.

People who are familiar with the area, this is the same building as that was occupied by Harley Davidson when they were operating in Koramangala. It has been redesigned and now is JSP Motorad. Plenty of waiting and catch up area, it is warm and welcoming also. Finally a place where you can go and chill and experience the brand. Oh they do have events also happening here, had a DJ turn table that was kept there for those of you who want to throw a party lol Second floor and more seating / catch up and a view to the service bay. It feels very comforting when a dealership opens its shop floor to the customers. Especially for bikers like me where we do work on our own machines and expect a certain minimum reassurance thanks to our OCD. Why can’t all dealerships be like this, what is there to hide. I won’t even mind paying a premium for a service experience that is transparent. So this is part of the shaft recall, BMW has added a vent at the bottom and a breather on top (pic not available). This will prevent moisture / water accumulation inside the shaft assembly that was causing premature ceasing and failures. Simple fix takes couple of hours at dealership workshop and BMW has provided training and tools required to carry the job as factory spec. 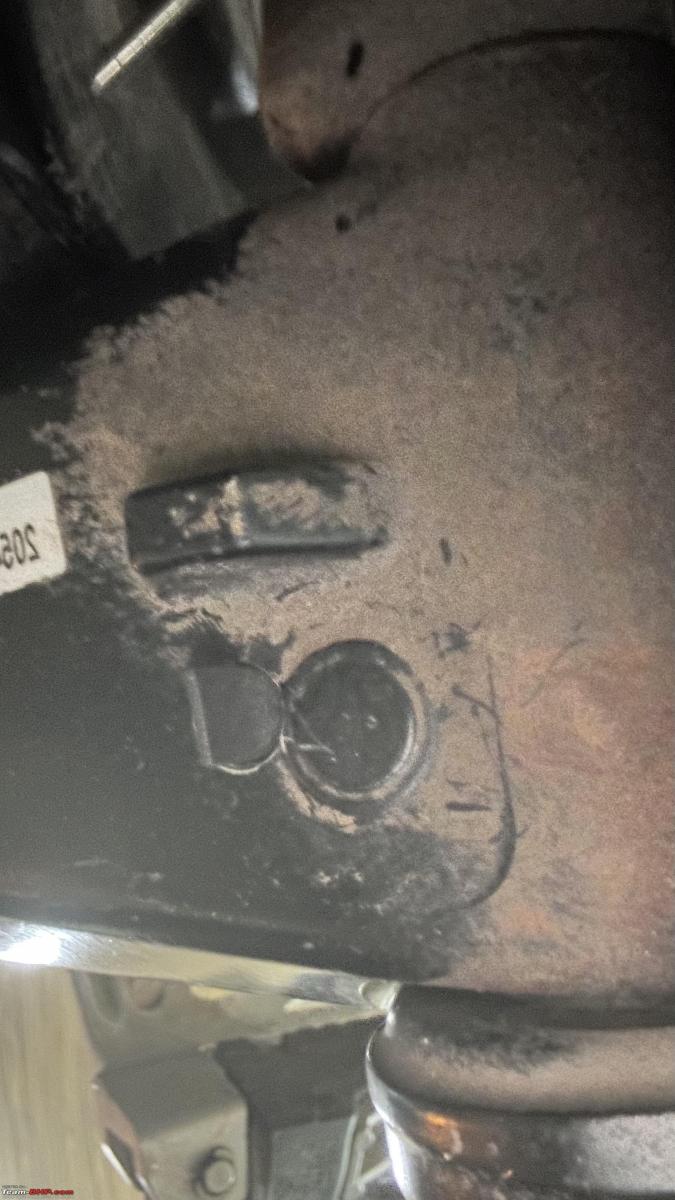 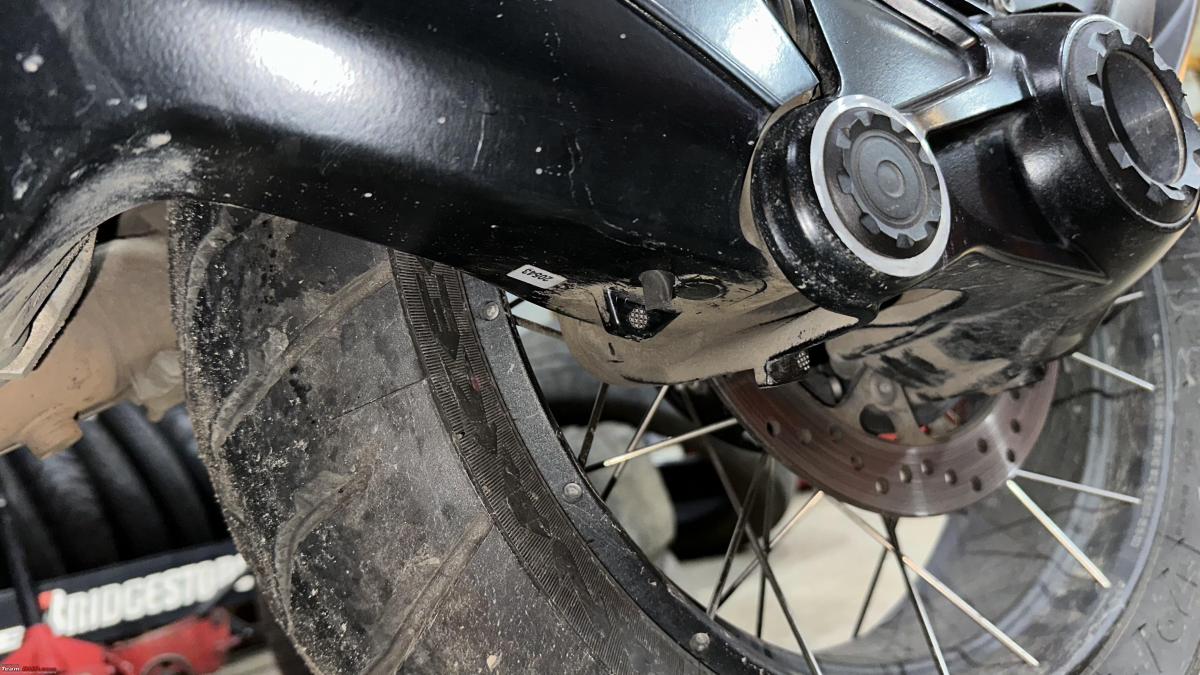 Once the vent is drilled, a special calibration tool is fitted to the rear hub. This comes with an additional ecu unit that then connects to the diagnostics machine. The shaft is held at a certain angle and then bike run at certain RPM to calibrate the whole thing. If there is deviations from the specs there maybe a shaft recall also that would be done for the vehicle (is what I understood). My vehicle had done hardly 12,000 kms so the specs were well within range. Calibration run in progress on another bike. 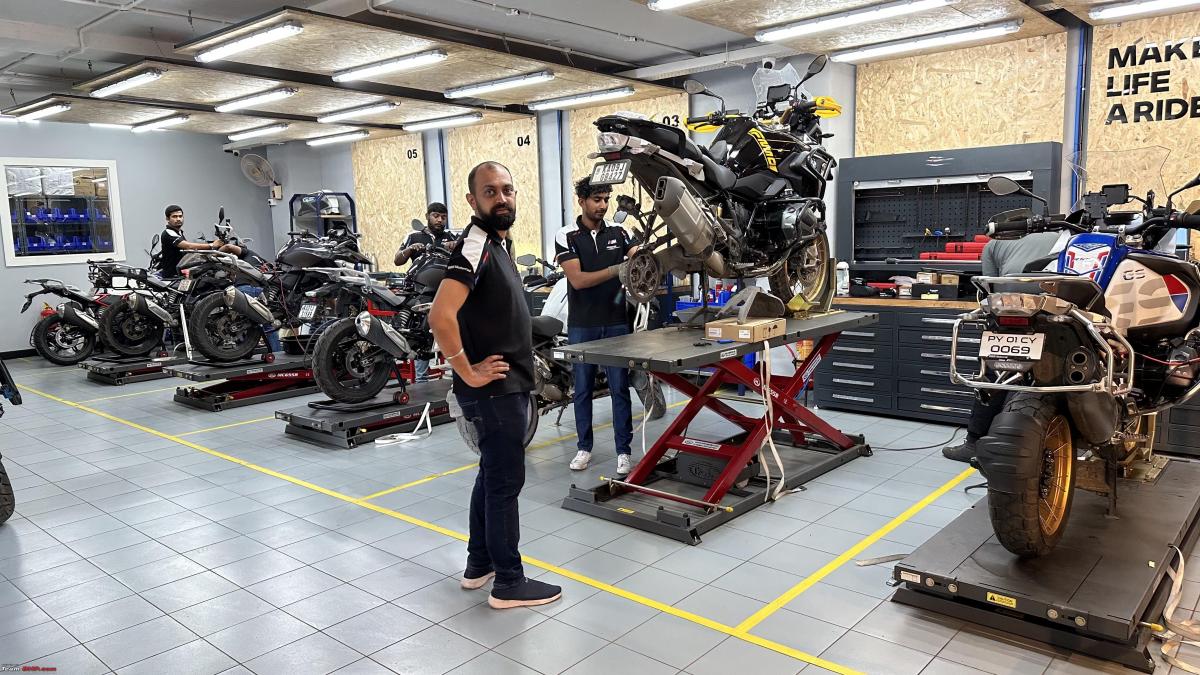 Overall these guys gave me one of the best service experience with bikes so far. Yes the mechs/staff are mostly ex Tusker and Ducati blr guys (as informed by folks from biking groups) but the overall vibe they give is definitely positive for now.

Hope they keep this standard up and give customers the premium feel that a brand like BMW is always associated with. Cheers and wishing the very best to JSP Motorad team in Bangalore.