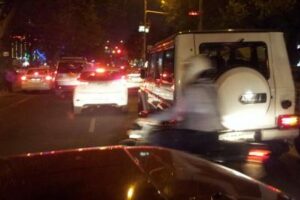 The drunk man involved in the incident is now claiming Rs 1.5 lakh as compensation for his injuries.

BHPian vaibworld recently shared this with other enthusiasts.

My friend has got a court summons regarding an accident he was in. The details are as follows:

After 2 months now, my friend has received a court summons where the man is claiming 1.5 Lakhs as compensation for his injuries. He has made a claim under the Motor Vehicles Act and is claiming the amount under insurance.

The police seem to be in on this.

Kindly share your advice on how to safeguard ourselves from such incidents.

Here’s what BHPian batish had to say about the matter:

There seems to be something missing here. If he was in traffic and a drunk man fell on his bonnet, how can he even claim any compensation for this?

Police usually do not file FIRs so easily. Since they did, there must have been some damage and that damage is not likely to be caused by a jam-stuck vehicle.

If he can, why not show his car as evidence? If there were any injuries, his car would have been damaged too in the accident.

From what I know, this compensation would be paid by his insurance company, so they’ll dig into everything before paying him.

Now in future to safeguard something like this would be to install a dashcam. Here’s my earlier post regarding the same.

Here’s what BHPian MT_Hyderabad had to say about the matter:

If there were no injuries, no claim would be entertained. A medical test must have been done and it should also carry the test for alcohol consumption.

Here’s what BHPian Rohan265 had to say about the matter:

Unfortunately, such cases are far too common. It’s not just the police, but a nexus of lawyers, police, and medical centres.

The bad thing is that it is highly unlikely that he will win the case. MACTs always rule in the favour of ‘victims’ i.e. whoever is injured. In the absence of physical evidence, the courts will rely purely on statements. And it’s not hard for the police to produce 3-4 witnesses to say that your friend was driving ‘rash and negligently’ and hit the pedestrian.

Considering the claim amount I highly doubt the insurance company will fight the case. It’s simply not worth the effort and expenses for them. They are better off paying the victim. The nexus knows this and hence keeps a claim amount of around 2L or below.

How to safeguard ourselves? Collect evidence. Lots of evidence. Use dash cams as others have suggested. Recording everything on your phone, including the discussion with Police. Take photos of the vehicle and the victim. Use date and time stamps. Store the original evidence somewhere safe as only the original is entertained in court as per the Indian Evidence Act.

Producing a valid medical record of injuries is barely an inconvenience for the police if they are inclined. And I am sure it will mention that the victim was not drunk.