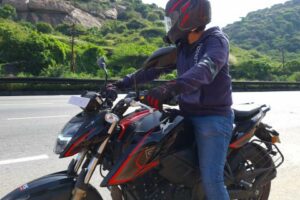 This bike is the complete opposite of the old RTR 160 and 180s. It is now one of the segment benchmarks. Absolute zero-to-hero story, in this one.

BHPian OffPoynt recently shared this with other enthusiasts,

Hello everyone! I’m OffPoynt, and this is my first post here.

Team BHP played a big part in my choosing this bike (thanks Hagaru and vijai!). And not many reviews of the 2022 bike, so I thought why not.

Car lover since as far as I can remember. I used to get my fix in my high school hostel days with an Evo magazine subscription (no mobiles allowed there). And watch Top Gear whenever I went for outings.

Many years later, I am now in a bachelor’s course for Visual Media (after having quit engineering). I used to be in a hostel for my engineering, but now though, the college is close to my home, which meant taking my dad’s nine-year-old Access 125 to college. This would create some scheduling conflicts with my dad (we did have a Figo, but he didn’t like taking it for small runs like groceries, etc). This is where the thought of buying a vehicle entered my mind.

I only experienced 3 bikes until now, and all thanks to my elder brother. He first borrowed a friend’s Unicorn. Then, brother-in-laws’ Pulsar 150. And he ended up buying an FZ, the first generation with the 164cc 14 hp engine. Which he ended up selling when he went abroad to fund his education. During all this, I was too small and young to even ride scooters, let alone bikes.

So, no bike in the family to ride, so no bike experience and no passion to ride. I did ride a bike for my license tests, but that was just because adding on a geared motorcycle license to a DL later is very complicated, so why not get them all in one go? I did have respect for super bikes still.

At this point (beginning of 2022), I seriously considered the TVS Ntorq and even pitched the idea to the family but it wasn’t taken much seriously. I also didn’t mind too much; the Access was doing well enough.
Fast forward to March-April when my parents tell me that my sister’s friend has an old Apache that he doesn’t ride and would lend it to me for my college duration, a BS3 Yellow RTR 160. Having not much interest in bikes, I postponed getting it for so long. The day before somebody else was about to borrow the bike, I went and got it even then, my reason to get it was that it would be faster than the Access (and not totally because my buddy bought a Pulsar N250 which I could totally keep up with).

Not even a month later. Just two weeks into riding the 160, it all sank in. Everything made sense. I immediately understood biking. I had found Pandora.

The last service before returning the bike. Sorry for the bad angle: By June – July, I started to feel bad for the 160. It was once a college student’s bike, now in my hands. I am a safe rider, but I do like to live my life in the upper half of the tacho (this engine). I felt bad, and not to mention, some of the problems on the bike (vibrations, rust in a few places, a cracked front cowl) which came with the bike, made me feel even more guilty about riding it and felt the need to return it. But not before I got one for myself…

Enter the “I want a new bike” phase:

I was in love with the RTR 160’s racy feel. Something about it really tickled my inner child when the bike was ridden hard. Naturally, that nominated the RTR 200 for me.

Aaaand out of all these options, I went with the Apache stable and chose an RTR 200 4V, 2022, dual-channel ABS with riding modes. My color of choice during the booking was white (quite a rare color here). I went with a small TVS dealer because my family actually had used their services during the 90s. There was a bigger showroom closer to my house but the salesperson just couldn’t be bothered to explain about the bike. No drive/energy whatsoever, which turned me off.

My first choice was actually the matte blue one. However, the showroom person told me it isn’t made anymore (which may/may not be true, I didn’t check) and went with white. This all happened before my year-end exams. I would ideally get the bike when the holidays started (win-win).

A few days, I went to the dealer and asked him for an ETA. He said that due to low demand for the white, manufacturing is less and that it will take time. Welp.

Went again after a week to check the progress. Same thing, except this time he mentions that two black RTR 200s in the variant I chose have just been delivered to a showroom by the factory and I could have one in a week.

Call me fickle-minded, but this was my first bike and first vehicle. I was honestly giddy for the whole one or two months before and after I got the bike. I told the dealer yes, I will take the black one. Two days later, the bike made its way to the dealer. The bike stayed there as there were some things to be done (registration etc). I personally couldn’t wait for the day I got my bike. And the day came.

It actually started drizzling during the delivery. Not to be stopped, I donned a raincoat and rode home in the rain. Delivery went well. The free TVS Xpod helmet would arrive a week later. I used my Vega until then. Everything went smoothly. No problems or issues on the bike. Number plate to arrive about 2 to 3 weeks later. At home, what a feeling!

Since my holidays had started, it gave me ample time to know my bike better.

Some might feel like I’ve bashed the bike a lot, but I want to make sure I put out everything.

The first service was done and dusted within a month’s time of taking delivery of the bike. After that, I waited till the bike hit 1000kms to ride to Bangalore. From Bangalore, I went for a ride to Krishnagiri with 3 friends. Me on mu bike.

I was riding with a friend who rode a Duke 390. Can’t expect this to keep up, but I tried my best. It was smooth throughout. I had no problems throughout. The screen getting scratched was a worry for me, who knows if I can get the glass replaced? So I bought this. Anyone wanting to do the same, be warned that the protectors are flat while the console screen has a slight curve to it. It applied fine, but the next day after college, I notice half the protector has unstuck itself from the screen. Took the protector off, cleaned the sticky side with a cleaning sticker from a phone tempered glass kit, and this time I used a hairdryer on the hot setting to get the protector to curve and attach properly. No problems so far except 2 edges where it won’t sit properly (minuscule, not there in the picture). This is the thigh pad. And this is the tank pad.

These were just about the only pads I found designed for this bike. It’s made of rubber and provides a really good grip, enhancing handling and everyday usage. They come in a pack of 6. Two for the tank and 4 for both sides. I wished the rubber would be a completely jet black color to match the bike, instead of the dark gray it is, but beggars can’t be choosers.

After seeing a few fins bent, I was pretty scared. The bike did not come with a radiator guard from the factory, and asking the salesperson came to nothing. So, I ordered one from Amazon. Again, this was the only good one I found. No variety. I attempted installing it at home and gave up. Got it done at the place I bought the bike. 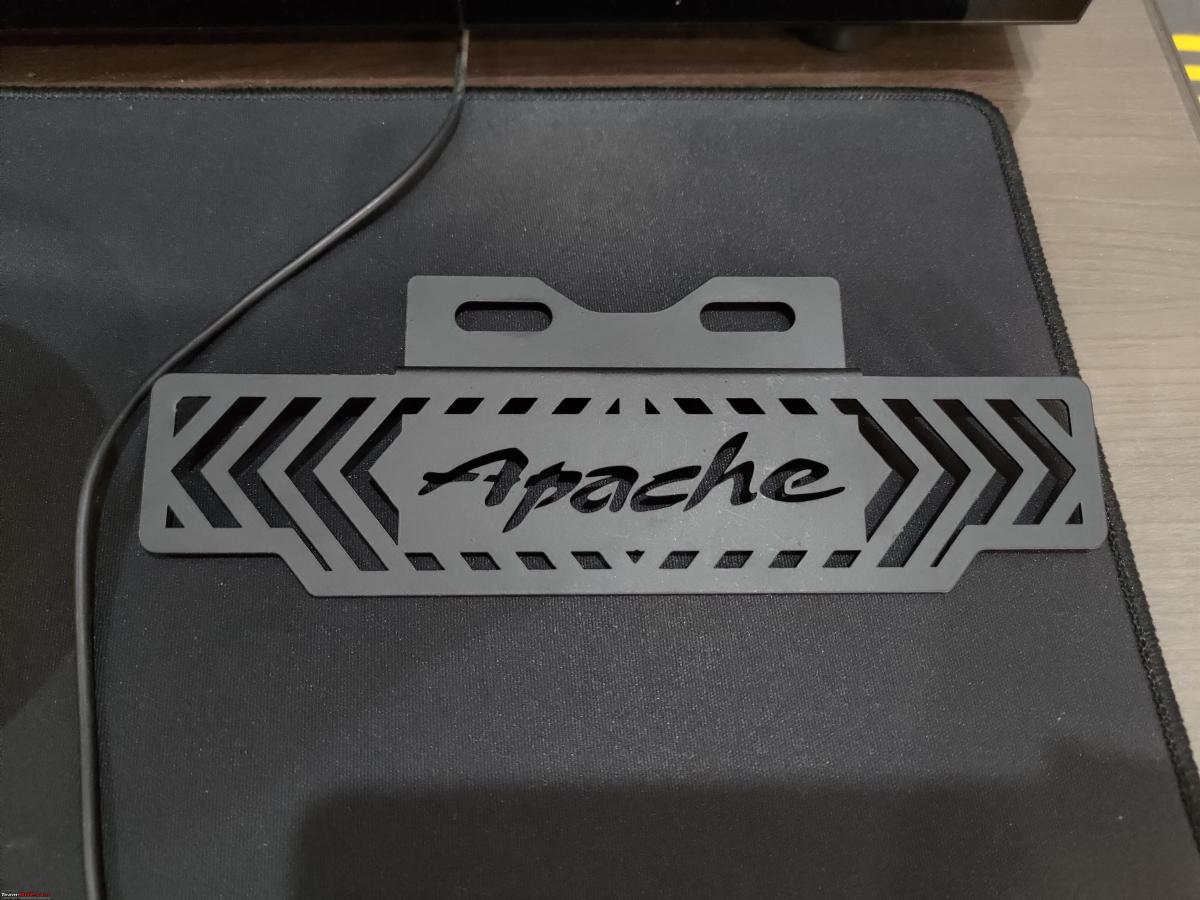 Pretty inexpensive, overall. The first service cost me around 650, with additional money for a wash and polish. Exceeded my expectations with respect to cost, I went to the center expecting a bill of 1k to 2k. I do not know if the center I chose can deal with major problems but since I don’t have any, no issues at the moment. The second service is nearing soon at 2.5k to 3k km. The oil filter was not changed (due to it being in pretty good condition, as per the sales/service person).

I love this bike. It may not have the outright power of its rivals, but it handles so well and so sweetly.

Actually, this bike was a bit of an impulse purchase. I have not test-ridden any bike, not even this one, before buying. Why? I do not know. All that I know is that I am satisfied and happy. More mentally stable, too. Riding has that effect.

Compared to the old 2V RTRs, I feel that the 4V RTR (I don’t know about the 160, which has slightly different ergonomics) has lost some of that unique RTR track feel. It is now an upright bike, and the tank shape along with the way it feels to grip, makes the ergonomics feel different from the 2V bikes. This isn’t a knock, per se. It places the RTR firmly into the modern naked/street bike. The sound too leans towards the sporty side but this is a really good-sounding bike and is a proper corner rocket. Not knowing how to corner (and not being the type to corner at high speeds), I am not the person to tell you how the 2 generations of RTR differ in this aspect. Nevertheless, I like this evolution. The three types of Apache, hmm. A Mustang of my own.