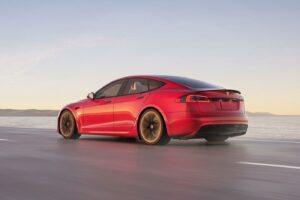 Bad news for Tesla fans. In a tweet yesterday, Elon Musk announced that the proposed Model S Plaid+ had been cancelled. This is notable because the new model was due to deliver an impressive 520 miles of range thanks to its next generation 4680 battery cells.

Characteristically, Musk downplayed the revelation: “Plaid+ is cancelled. No need, as Plaid is just so good.” The top-spec model was announced at a battery event last year, although production had already been delayed. Now buyers will have to make do with the ‘standard’ Plaid variant.

Musk was at pains to remind people what that meant: “0-60mph in under 2 secs. Quickest production car ever made of any kind. Has to be felt to be believed.” Rimac might have something to say about that, given the extraordinary level of performance offered by its new 1914hp Nevera hypercar – but the 200mph-capable tri-motor Plaid is undoubtedly set to be brisk. And with an estimated 390 miles of range, very usable too.

That’s slightly less than the 412 miles offered by the current ‘Long Range’ dual motor Model S, but is offset by that car’s laggardly 3.1 sec 0-to-60mph time. For now Plaid+ is still showing on the UK website as future option for £139,980 (it often lags behind Musk’s tweets) but expect the £110,980 Plaid – due to be seen at an additional event later this week – to be the sole option going forward.