Home » Auto News » Morgan refreshes Plus Four and Six for 2023

Morgan refreshes Plus Four and Six for 2023 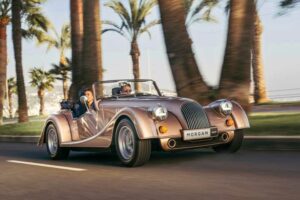 Don't let the familiar face fool you; the four-wheeled Mog has been given quite the spruce up

Morgan doesn’t have it easy when it comes to releasing a mid-life product refresh. It’s a balancing act of cramming in new technology and light styling tweaks without overegging the bake and putting off customers who love the traditional appeal. So, Morgan fans, you’ll be happy to know that the newly announced 2023 update for the Plus Four and Plus Six focuses on perfecting the recipe – rather than rewriting it.

Peel back the familiar bodywork and you’ll find a number of upgrades and refinements. The biggest, and likely most controversial, update here is the introduction of electronic stability control. It’s there to prevent any sudden snaps of oversteer, which the current generation can be prone to with all that BMW turbo torque, but you can thankfully dial it down by selecting Sport or Sport+ driving modes. These driving modes have also been reworked on cars fitted with the eight-speed auto, improving the snappiness of shifts in the sportier settings. There’s new hardware, too. Both the Plus Four and Six benefit from all-new AP Racing brakes, while new bushes and dampers should provide a step up in ride quality.

The rest of the 2023 refresh centres around jazzing up the cabin, highlighted by a new aluminium dashboard panel that can be specced in either silver, black or finished in the body colour. Don’t worry, the updated Mog has still got wood. Specifically, three new veneer options, including ‘Engineered’, which fuses aluminium strips with wood in a way that looks a bit like teak decking on the back of a yacht. It looks right at home on the inside of new models, though the same still can’t be said for the BMW-style drive selector that you get on automatic models, which, unfortunately, hasn’t been changed for the facelift. At least the LCD driver’s display has been given a bump up in quality and you still get good old fashioned analogue dials that have undergone a redesign.

Morgan is particularly proud of the new Sennheiser audio system. Sennheiser makes some of the best audio equipment on the planet, and it’s worked closely with Morgan to develop a system that packs a punch while keeping weight to a minimum. Quite how that translates into a sports car with no fixed roof is to be seen, but Sennheiser will be using its trick ‘AMBEO Contrabass algorithm’. It’s a clever bit of software that optimises audio depending on the environment the listener is in. So, if you’ve got the top down, you should still be able to clearly hear your Spotify playlist or, say, the voice of a softly spoken podcast host.

“The Plus line in 2023 presents a marked evolution of the four-wheeled Morgan. As with any enduring design, it is crucial to strike a balance between moving forward whilst complementing established product qualities”, said design chief Jonathan Wells. With the Plus Four and Six boasting over 70 years of ‘established product qualities’, it’s little wonder Morgan decided to leave the exterior styling untouched for the 2023 update. That being said, it’s created six styling options that have been designed with the new interior in mind, but if you choose your own spec if you don’t like people telling you what to do. You can even assign a ‘pilot’ and ‘co-pilot’ call sign that’ll be displayed on the side of the car.

If that sounds like your cup of tea, then you’d better head over to a Morgan dealer sharpish. Orders are open now, with deliveries set to kick off in January. Better get thinking of your call sign, then…