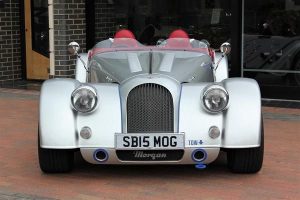 McLaren and Aston Martin have now adopted the speedster concept; Morgan was there years ago…

It's easy to see why the speedster idea is becoming popular. In just the past couple of years we've had a 911 Speedster with a GT3 engine, the Ferrari Monza SP1 and SP2, the McLaren Elva and the Aston Martin V12. Now it looks like Lamborghini is entering the fray as well. They're popular primarily because removing a roof (and in some cases a windscreen as well) make a driving experience more exhilarating, which is always a good sell. Combine that with a similarly dramatic effect on the appearance and very low volumes, and the appeal for both manufacturers – who can let imaginations run free and charge for the privilege – as well as customers, is plain enough.

The trend has produced some impressive cars, too. Thanks to increased exposure to that glorious flat-six, a 911 Speedster might be an even more enjoyable road car than the GT3 coupe; as well it should, you might argue, for almost twice as much – the most affordable currently on PH is £250k. And that's obviously a lot less than the even rarer examples listed above. So what to do, then, if you've decided the speedster life is the one for you – but the six-figure one is not? Well, don't forget the Morgan…

Yep, years ahead of hypercar manufacturers removing windscreens and adding retro touches, Morgan created the Plus 8 Speedster. It was April 2014 in fact, the car announced to mark Morgan's centenary and limited to just 60 units. Somewhat against the speedster tradition, the Plus 8 was more affordable than the car on which it was based, the removal of the roof and windscreen lopping £15k from the price. Back then we all knew that V8 Morgans weren't long for this world, so the £69,995 RRP almost looked like good value as a near end-of-the-line special (an impression all but confirmed by the launch of the £129,000 50th Edition in 2018).

The car itself was exactly what you might have expected from a traditional Morgan without a windscreen and with a roof that was only there to keep puddles out overnight. It was demanding, exhausting, a long way from perfect and yet entirely captivating. For all its dynamic flaws, a car that looks and sounds like the Speedster does couldn't be anything less. And, well, Morgan ownership always requires a few compromises anyway – the Speedster's additional ones were hardly unexpected.

The 'Mr Toad goes hot rodding' look, limited production run and status as one of the last V8 Morgans means Speedsters are prized in 2020. This one was made in 2015, is yet to reach 1,000 miles and is for sale at £90k – £20,000 more than when new. It looks sensational in silver with red leather, comes with the six-speed manual that ought to further enhance collectability and looks about as close to a brand-new Speedster as it is possible to buy.

And although it might be hard to imagine on October 21st, think of the joy a Morgan like this will bring in more favourable conditions. Oh sure, you'll need eye protection, maybe some ear protection as well, and a good hair day won't stay that way. But there's nowhere the Plus 8 Speedster won't look superb, even if an Elva and a Monza are there as well. Factor in the side-exit exhaust soundtrack and terrific value for money compared to the 2020 crop of speedsters, and it's virtually a no-brainer.