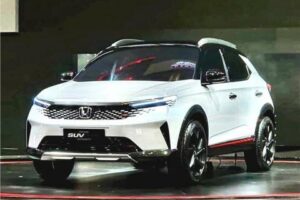 The new compact SUV will be based on an updated version of the Amaze platform (PF2).

In early January, we had reported about Honda’s plans to launch a compact SUV in the Indian market. Now, a new media report sheds some light on the brand’s upcoming SUVs.

Honda has not one, but two SUVs lined up for India. The first model is a compact SUV that is expected to debut in 2023. The Japanese brand also has a mid-size SUV in the pipeline. It is likely to be launched by 2024.

Reports suggest that the new compact SUV will be based on an updated version of the Amaze platform (PF2). Codenamed: 3US, the design of the new model is almost ready and the engineering work is also ongoing.

It is said that the new model could be offered with the 1.2-litre petrol and 1.5-litre diesel engines from the Amaze. The former is even said to get some form of hybridization.

The new compact SUV will replace the WR-V in Honda’s lineup and will compete with the likes of the Hyundai Venue, Kia Sonet, Tata Nexon and the Maruti Brezza.

The second offering will be a mid-size SUV (codenamed: 3RA). It is said to be based on the PF2S platform. The Hyundai Creta-rivalling model is expected to share its electronics and powertrains with the City.