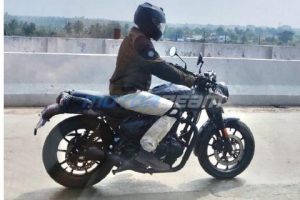 The Hunter could be powered by the 349cc, single-cylinder engine from the Meteor 350.

Royal Enfield’s upcoming roadster has been spotted testing once again. The new model is rumoured to be called the Hunter.

The bike features a circular headlamp and instrument cluster. It has a teardrop shaped fuel tank, low seat, a short tail section and rides on alloy wheels. As you can see in these images, the bike offers a more upright riding position.

The engine and the upswept exhaust are finished in black. The exhaust looks shorter than most Royal Enfield models. The bike has telescopic fork suspension at the front and twin shock absorbers at the rear. It is equipped with disc brakes at both ends.

The Hunter could be powered by the 349cc, single-cylinder engine from the Meteor 350. This motor produces 20.2 BHP and 27 Nm.