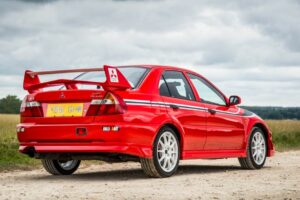 With Mitsubishi leaving our shores, UK importer The Colt Car Company announced a few weeks back that it was to sell its entire heritage fleet based in the country. As it seeks to transform itself purely into an aftersales business, the fantastic collection of vehicles is merely a loose end to tie up.

Sad though this made us, we couldn’t ignore the rare opportunity this presented. Mitsubishi UK took an incredible amount of pride in these cars, the usage of which was tightly controlled. The sale at newly founded Automotive Auctions gave punters the chance to get hold of some of the best cared-for classic and modern classic models from the brand in the world, which was reflected in the hammer prices.

The defacto auction star, a 10k-mile Evo VI Tommi Makinen Edition, reached an incredible £100,100. That’s not quite a record for all Lancer Evolutions, the most expensive of which was an unused IX that sold for $138,000 in 2017. Factor in exchange rates of the time and inflation, and the price comes out at a few thousand more.

Still, the result is almost certainly a record for Evo VIs, and over four times the price achieved by a TME sold on Collecting Cars last summer. The Evo IX 360 MR, a car we drove along with Mitusbishi UK’s TME for a feature a little while back, also did very well. The stone grey Lancer, which has under 5000 miles on the clock, reached £68,900.

Right at the other end of the Mitsubishi timeline was the 1974 Colt Lancer, the first UK spec car the company ever registered in the country. It sold for £15,000, while a Colt Galant managed £11,600.