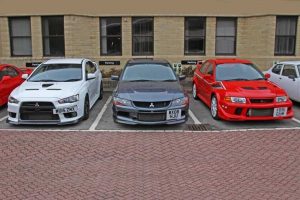 Japanese brand's collection of 14 icons – including Evos, a Colt and Shogun – are up for grabs

Following confirmation that it is to stop selling cars in the British market, Mitsubishi UK’s press office has announced that it’s putting all 14 cars from its heritage collection up for sale at auction. Several cars from the fleet will be familiar to PHers, including the iconic Lancer Evo VI Tommi Mäkinen Edition from Dan’s 2020 Rise and Drive video, which unsurprisingly is expected to be the ‘highlight’ of the auction. It, like the rest, is in absolutely tip-top shape, with just 10k on the clock and Mäkinen’s signature proudly displayed under lacquer on its bonnet.

Naturally, there are other awesome Evos in the collection, like a gorgeous IX MR FQ-360 HKS and an X FQ-440 MR, which should have no trouble in finding new homes. There’s also a whole host of other classics, like a 1988 Starion Turbo and an absolutely lovely ’74 Colt Lancer. We’ve always had a soft spot for Mitsubishi UK’s Mk2 Shogun 3.0 V6 and the 3000GT, as well as the Mk1 SWB Shogun from ’87 and Colt Galant from 10 years earlier. And, to be honest, we love the 1989 Galant Rally, which was liveried in the eighties to commemorate Pentti Airikkala’s Lombard RAC Rally victory in a Galant VR4.

Topping that, at least as far as rally connections go, is Guy Wilkes’s two-time British Rally Championship-winning Mitsubishi Evo IX. No doubt that car will be going straight into a collection. Slightly less exciting but no less significant to Mitsubishi’s recent successes is the 2014 Mitsubishi Outlander PHEV on the fleet, because it’s long been the brand’s best-seller in Britain and a class-winner for plug-in hybrids. There’s also a rugged 2017 L200 Desert Warrior and a Mitsubishi Jeep, an ’83 example of the licenced Jeep builds Mitsubishi had operated since 1952.

Perhaps surprisingly (and fully emphasising the UK team’s need to close up shop), every vehicle on the heritage fleet is being offered with no reserve. The sale is running on autoauction.co.uk for the month of April, with a staggered end to each lot throughout the final day on the 30th. It’s an appropriately eclectic collection for a brand that has produced some fantastic cars in the past few decades, and a sad farewell to the company as it departs Britain. We wish it wasn’t so. There’s perhaps a tiny flicker of hope that it may one day return, not least because a new deal with alliance partner Renault has secured the brand’s future on the continent, with two, French-built models due by 2023. But for now, in Britain, the curtains are closing for good. Mitsubishi is to become an after-sales company by the end of 2021.