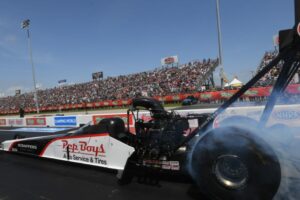 Johnson’s current assignment is with Doug Kalitta, but for three of the past four seasons he oversaw Mike Salinas’ Scrappers Racing operations. (Salinas opted out of the 2020 season.) Then he left at the end of the 2021 campaign.

And Salinas is winning.

That’s not a derogatory remark about Johnson. It’s exactly the opposite. It’s a compliment.

Salinas, the two-time and most recent winner on the Camping World Drag Racing Series, said so following his victory Sunday at the Circle K Four-Wide Nationals at Charlotte.

“He taught all of us,” Salinas said of Johnson. That includes reigning champion Steve Torrence and points leader Brittany Force. “Indirectly, Alan is racing himself. It’s a great thing. What he does bring to the table is a discipline that most people don’t have in racing. He’s such an amazing man. He really is.”

But, as Salinas noted, “The data is mine,” and the man with whom Johnson swapped jobs in the offseason knows just what to do with it.

“Now, flip side to Rob Flynn . . . When I first needed a crew chief, I thought he was the most underrated, unappreciated crew chief out here, probably the most brilliant. He takes everybody else’s stuff and manipulates it and makes it ours. We have a better car that is going down the track almost every run and not hurting parts,” Salinas said. “If you see us spin tires, it’s because we’re trying something new and we know we’re (safely) in the show.”

He said that after the winners circle photo session, while he was visiting with the media, Flynn probably was poring over data for the May 13-15 Virginia Nationals at Virginia Motorsports Park, south of Richmond.

“I’ll bet after we finish celebrating, Rob will go in the trailer and he’ll sit there for another couple of hours, looking at Virginia (data) already. The man lives in that trailer, on the computer,” Salinas said. “So mild-mannered, sweet man, gentle . . . he’s deadly. The guy’s deadly. Keep an eye on him. I’m lucky that I get to drive the car he’s tuning.”

Salinas wasn’t making a “Rob Flynn is better than Alan Johnson” kind of statement. But it was clear that all the naysayers who thought Salinas’ team would fizzle when Johnson left were wrong. Whatever life throws at Salinas, he has carved his own path through it or around it.

But so have the other racers who have had their magic moments with Johnson. Together Johnson and Schumacher powered to five consecutive championships before Johnson left the U.S. Army team after the 2008 season. Since 2009, Schumacher has claimed two more Top Fuel championships, had a winning record every season he competed, and recorded 34 victories (nearly half of his all-time class-leading 85).

Steve Torrence hired Johnson as tuner/consultant in late September 2015 and stayed on for the next season. But since 2017, Torrence has earned 43 of his 51 victories, blasted to four consecutive championships, and has won 80.7 percent of his elimination-round match-ups (272-65).

After guiding Force to the 2017 title, Johnson went to Scrappers Racing to work with Salinas. And Force hardly has skipped a beat. In 52 races so far with crew chief Dave Grubnic, she has won five times in 11 final rounds, qualified first 23 times, and set low elapsed time of the meet 28 times and top speed 27 times.

The point is that Johnson gave each of their careers a push in the right direction and they have put his instruction to use. 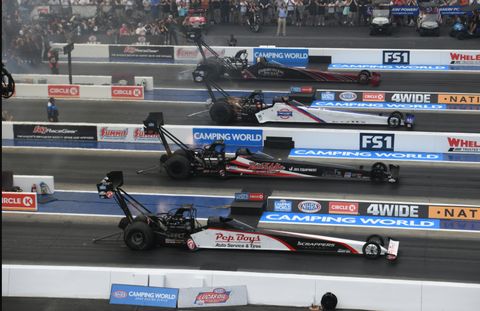 Salinas said, “Another thing we’ve learned by being with the previous group . . . (every pass) is just another run. You belong there. You’ve got to believe you belong there.” And that’s when he became emotional last Sunday. He said, “Most people don’t understand: this stuff is hard. We’re racing with the best guys in the world. But if you believe you belong here, do the right thigs to stay here, you’re going to be here. You’re going to win.

“This isn’t going to be the end for us. I just know it,” he said. “Everybody in our pit, they’ve got raw emotion for what we’re doing – all the guys out here. This is hard stuff. We take this stuff so hard and take it to heart. I honestly feel bad for the other guys who didn’t win, because I know what it’s like on the other side.”

While it might appear that Salinas, 60, found overnight success, that isn’t true. He’s been toiling in the NHRA Top Fuel class since 2011. He won three events prior to 2022 and his best finish in the championship was third in 2021.

This year, everything seems to be clicking for Salinas.

“We’re hitting our stride right now. I’ve worked for this for 17-18-20 years: losing, losing, losing. You know how you’ve got to pick yourself up from losing to win? Well, that’s us. That’s why we named this team Scrappers: because we never quit. We just keep going. I guess I’m getting older so I’m getting a little bit more emotional,” he said.

He got some validation that his grinding was paying off from Torrence last Sunday. Torrence, king of his own Top Fuel dynasty for four years, understands the struggle. He is out of his dominating groove at the moment because he and his Capco Contractors Dragster team are preparing for a fifth title run. Salinas described Torrence as a “great guy, great role model, great driver” and said that congratulations from Torrence meant a lot to him. “They’ll be back, so we’re going to have to race him and hopefully beat him,” Salinas said.

“After you win, we’ve got another track to go to. The game changes.”

Staying humble, Salinas said, is a must right now, but he did make a prediction about who the legit title contenders will be once the Countdown starts in September.

“There’s a lot of racing left. So what you can’t do is get overzealous and act like you’re all that. Brittany (Force) and I are the only two who have won (twice). She’s a tough cookie, that kid. I love her. She’s amazing,” he said. “There’s three of us that are going to be, at the end of the year, fighting for this thing, and I believe that.”

He was referring to himself, Torrence, and Force.

“We’ve got to keep this thing going. It’s like a test. Everything we’re doing is a test. It’s tough out here,” he said.” My crew, my parts and pieces, my Lucas chassis, everything we do is setting us up for Virginia.”

Salinas said he knows he has to keep focused: “When you win this thing, you’re so excited. But it’s just like another round. After you win, we’ve got another track to go to. The game changes. I got to go home [to San Jose, Calif.], back to work, make sure everything is good over there, make sure we get things settled. If my brain doesn’t fix what I need to fix, it stays on there. It’s real hard. So the same isn’t the same. (But) I know what we have a plan for, what we’re trying to do.”