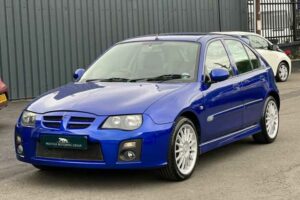 Apart from its missing MG badge, this week's contender would appear to have it all going on…

About five years ago Shed uncovered not one but two very nice MG ZRs. One, a 105 Trophy, was priced at the unlikely sounding amount of £9,000. The other, another 105 3-door in silver that became Shed of the Week, cost £675. It didn’t look any worse than the nine grand specimen, and in some respects it looked better.

Not sure what that shows, other than the usual one of there being one born every minute. Those ZRs both had the 1.4-litre engine, a nice little unit that without much bother could be tuned from the standard 105hp to something nearer to 190hp. This week’s ZR, or X30 as they were excitingly codenamed at the time of their launch in 2001, is a 1.8-litre-powered 120 from 2005.

That was the last year of production. The year before that the ZR was Rover’s best-selling car, and anyone who has driven one will tell you why. They’re brilliant fun. The base 1.8 had 115hp and 120lb ft of torque, not massive numbers to be sure, but enough for a 0-60 of 8.6sec and a 119mph top speed. The great thing about the ZR though was that you hardly ever needed to slow down for corners. The chassis was great. If somebody really got in your way it was good to know that the 120’s brakes were bigger than the 105’s.

The highest-powered ZR was the 160 which with a variably valve controlled (VVC) version of the 1.8 produced 158hp. Its torque figure of only 128lb ft was hardly more than the regular 1.8’s but it liked to rev so it was a good fit for the early Elises.

As noted in Shed’s earlier ZR scribblings, the last couple of years’ worth of ZRs up to MG Rover’s sad demise in 2005 did suffer from dodgy Security Control Units. These were supposed to keep the horn, windows, alarm and central locking under control. As with the steel gasket kits that made cylinder head failure on K-Series engines nothing more than a bad dream (any K-Series that has made it this far will almost certainly have had its gasket changed and should make it a lot further still), there was an SAIC kit to sort out the SCU.

That’s if it hasn’t already been sorted out on this car, which will likely be the case if it’s been mechanically maintained to anywhere near the same level as its cosmetic appearance would suggest it might have been. It does look to be in very good condition. Even the famously fragile seats seem to have only been sat upon only by ballerinas and hummingbirds. This ZR doesn’t have a sunshine roof, either. That’s good because they rattle like Billy-o.

Other rattles will doubtless be heard from various bits of trim. Not from carpets, because they don’t rattle, but whatever noise they do make will be down to the clips having broken. Door locks, starter motors, alternators and clutch release bearings all need watching. It makes a change from watching grass grow.

Okay, yes, technically this MG is outside our £1,500 limit as the vendors are proposing to stick a £50 admin fee on top of the asking price, a move which can always be relied upon to raise the blood pressure of shedfolk, but Shed is giving himself medical leave to do this and if you can’t chip them down to below £1,500 then you should really be handing in your badge.

Looking at the rest of the dealer’s stock they’ll probably be perfectly happy to accept a reasonable offer for you to remove it from their BMW-heavy forecourt, where it serves as a lonely reminder of where MG Rover might have been if only politics and money hadn’t messed things up.