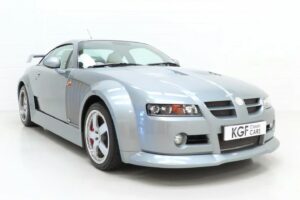 It never lived up to its 1,000hp claim, but there's still plenty to love about MG's brutish supercar

It’s 2002. I’m standing on the banked spectator area near the Campbell/Cobb complex at Thurxton and I’m completely transfixed by the black and green MG ZTs lapping somewhere in the mid-pack. While not blisteringly fast – despite having touring car aces Anthony Reid and Warren Hughes at the wheel – I was hooked on MG’s fledgling X-Power brand and couldn’t wait to see what this exciting British performance tearaway had up its sleeve.

Not a lot, it turned out. Clearly a brilliant marketing exercise (I’m sure I’m not the only one who scooped up all the tat back in the day), but X-Power never turned out to be the British equivalent of AMG or M that nine-year-old me hoped it would. In all fairness, it did release some truly bonkers concepts along the way, such as 500hp variants of the TF and ZT, but the only offerings that made it into showrooms were warmed-up versions of MG’s hatch and saloons. Oh, and of course, the car we have here.

To say the SV was X-Power’s first bespoke project to hit the road would be a bit of a stretch. The idea came about after MG Rover acquired boutique Italian carmaker Qvale, which had been developing its Mangusta roadster – itself originally branded a De Tomaso. Noticing that it would make a great base for a performance car, and that it was already homologated for use in the US, MG got to work building a concept – the X80. Apparently, the styling was deemed too understated (read: hideous) at the time, so McLaren F1 designer Peter Stevens was called upon to create the look we’ve all come to know and, for some, love.

There’s no denying it looks quite unlike anything that’s come before or since, seemingly combining tuner, exotic and muscle car elements into one package. And while it can look a little, erm, aftermarket, this isn’t some fibreglass phenomenon built in the back corner of the MG Rover factory. Nope, the SV’s bodywork was made up of carbon fibre in places, aluminium in others, though it was hardly a featherweight at 1.5 tonnes. Still, it ticked some of the boxes an exotic supercar should.

Things get a bit more complicated on the engine front. Initially, there was a plan to offer the SV as a 1,000hp package complete with nitrous kit (this was peak Fast and Furious era, after all), which ultimately proved to be a load of rubbish. Instead, the original SV was powered by a Ford-sourced 4.6-litre V8 developing 320hp, though the car we have here is the punchier SV-R. It came with a Roush-tuned 5.0-litre V8, upping the output to an official 385hp – though it allegedly produced closer to 410hp. Hard to see how 1,000hp could come from either of those engines, but it was still a massive jump over the rest of the MG Rover lineup.