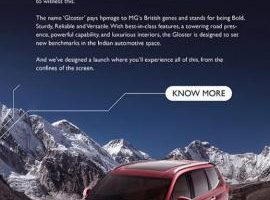 The Gloster will compete with the Toyota Fortuner, Ford Endeavour and the likes.

The MG Gloster will be unveiled on September 24, ahead of its market launch that is expected to take place next month. You can watch the live streaming on MG India’s Youtube channel.

The Gloster was also showcased at the 2020 Auto Expo. It is a re-badged version of the Maxus D90 sold in the Chinese market.

In India, the SUV will be powered by a 2.0-litre, 4-cylinder, twin-turbo diesel engine producing 215 BHP and 480 Nm. The engine is likely to be paired with an 8-speed automatic transmission with paddle shifters and a shift-on-fly 4WD system with a Borg Warner Transfer Case with a separate rear differential lock button. It comes with four driving modes – Rock, Sand, Mud and Snow. The SUV has 5-link integral rear suspension.

The MG Gloster will compete with SUVs like the Toyota Fortuner and Ford Endeavour in the Indian market.

Thanks to Monish Artwani for sending this image in. Heartfelt gratitude for sharing it with other enthusiasts via this Team-BHP page!