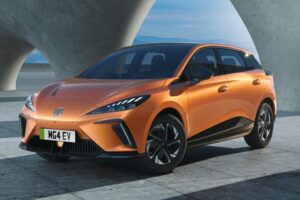 Hatchbacks underpinning sports cars used to happen all the time; here's how it'll look in the EV era

Yes, yes, an electric hatch with SUV overtones – what has PH come to and so on. But the MG4 is a little more significant than yet another VW ID.3 clone (if you’re seeing a likeness to the Cupra Born here, then welcome to the club), because it’s believed that this car’s new MSP platform will be the basis of the MG Cyberster sports car. And that’s rather more interesting.

For now, MG merely says that the Modular Scalable Platform used here will ‘feature across a wide range of forthcoming cars’, so will have to focus on this one rather than speculate any more for now. That said, MG has confirmed a 50:50 weight distribution for the 4, plus rear-wheel drive and a low centre of gravity, which is an auspicious start for ride and handling. Furthermore, both the 51kWh and 64kWh batteries offered measure just 110mm in height. MG reckons that means interior space is still strong, and hopefully points to a battery that doesn’t weigh a tonne, either.

Then there’s the MG4 EV Trophy, which is not a spec level we ever expected to use for an MG again (but apparently does already exist on the ZS SUV). It has the long-range battery but a 270-mile range, thanks to extra kit, which includes a heated steering wheel and front chairs, electric driver’s seat, a Bluetooth key and a host of active safety kit. Sadly, it isn’t available in yellow like the old MG F Trophy, but buyers will be offered Volcano Orange, Camden Grey, Dynamic Red, Black Pearl, Holborn Blue and Arctic White.

Guy Pigounakis, Commercial Director at MG Motor UK, said: “We believe our new MG4 EV will be an enticing proposition for customers seeking an affordable electric car without compromise. The potential of the innovative Modular Scalable Platform is considerable and is set to deliver some exciting new MGs over the coming years.” Just talk about the Cyberster already, Guy! The 4 EV launches in September; given the popularity of MG’s existing line up, don’t be surprised to see quite a few on the road soon after.