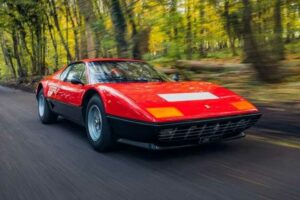 Drive it. Or just look at it. Either way, it'll probably be love

I’ve never had the good fortune to drive a Ferrari 512 BB, so I cannot tell you first-hand what it’s like to be behind the wheel of one. But you know what? I don’t even care how good, or not, it is on the road. Of course, I would love it to be a hero car that’s mesmerisingly brilliant on every level, but it’s not the be-all-and-end-all for me. If I had £200k knocking about – I know this one’s a little over that but there’s always a deal to be done – then I’d buy this, drive it home, and if it was a right old stinker, I’d park it up and simply look at it. Morning, noon, evening and night.

A 308 is lovely. And when it comes to it, probably prettier than the 512 BB. Better proportioned, too, I will concede. The 512 BB does have a rather protruding snout that’s not very happily balanced visually by its stubby little tail. Still, that’s fine. The 308 was for playboys and PI’s in Hawaiian shirts with a caterpillar top lip. The 512 BB was for the big boys. Ferrari’s flagship car and a serious thing that eschews the last bit of gracefulness for the majesty of what lurks beneath the bodywork.

You can sense what’s there just by standing behind it. It’s not far from 10cm wider than a 308, and that’s a lot. It immediately gives it extra gravitas. And when you lift up the rear clamshell you can see why it’s so girthy: that engine. All 4,942cc of horizontally opposed (hence the BB for Boxer Berlinetta), naturally aspirated, 12-cylinder greatness. Is there anything more evocative? Somehow, the flat-12 outdoes even the V12 by dint of its rarity and long-standing association with the godly Maranello marque. Enzo used it as a tie-in with the Formula One cars – although by 1981, the year this car was built, Gilles Villeneuve’s Ferrari 126CK was sporting a little 1.5-litre turbo with half the cylinders.

The 512 BB is made even more special by the clamshell. Clamshells are wonderful for two reasons: they’re another hint at motorsport and they reveal all. There’s no peering in with a clamshell. It’s all just there, laid bare: engine, suspension, driveshafts, the whole flipping lot. You can see all the details, like the big ducts on the underside of the rear bodywork that mate with the airboxes. The twin airboxes feed those four, huge, hungry, triple-choke Weber 40 IF3C carbs the sustenance they crave. And this car would be one of the last to have those. Not long after it was made the 512 BB became the BBi, with Bosch K-Jetronic injection. Not quite as romantic, that – although far easier to set up.

In this iteration, the flat-twelve made good numbers, even if there’s always a question mark over the exact figures. Something around 360hp at 6,200rpm and 333lb ft at 4,600rpm, but depending on which source you look at there’s a plus or minus of a few. That’s more than enough, mind. In a car weighing around 1,500kg, 0-62mph was yours for the taking in just over five seconds and the 512 BB would just nudge 180mph before it ran out of puff. Not bad for something that arrived on the scene in 1976.

It’s said it was an easier car to drive than the 365 GT4/BB, which was the car it was based on. The 365 GT4/BB had a smaller, 4.4-litre flat-twelve, and when it was launched in 1973 the press were wowed by its power and handling; some said it was class leading at the time. Funny how the cold light of day gives a different perspective. Once the initial euphoria had died down it wasn’t long before people were noticing the 365 GT4/ BB’s unpredictability rise to the fore. This actually turned out to be very predictable: it would swap ends with a snap if you snapped the throttle shut mid-bend.

So Ferrari did some work to make the 512 BB less of a handful, including the fairly obvious trick of fitting wider rear tyres. After all, more grip means less chance of spinning, although you still could get the 512 BB out of shape if you weren’t mindful of where all that weight was, waiting to catch you out. It was also more comfortable than its predecessor, thanks to the additions such as air conditioning.

Moving onto the interior, is there anything richer in late-70s kitsch than this 512? Those signature Daytona seats, the classic rocker switches on the centre console next to the wonderfully tacked-on chromed open gate, the red-on-black dials. If that wasn’t enough to get you into the mood, how about the Audioline silver-grey stereo with graphic equaliser? How magnificent is that?

You see that’s why I could happily sit looking at this car. Not just staring at its bodywork or its engine, but so many other elements that make it a special car. Rest assured I would drive it, though. Of course, I would. It would be impossible not to with the thought of that flat-twelve wailing away behind me. And I don’t have to have driven one to know it would sound sensational.