Mercedes-Benz is selling the EQC at a discount of 7L 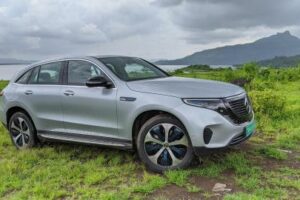 BHPian pqr recently shared this with other enthusiasts.

Since the EQC launch, direct competition also introduced their own BEV SUV in India at a similar price point with similar or better performance. Mercedes Benz or for that matter any other luxury carmaker in India does not disclose actual sales figures, so, it is not apparent how the luxury BEV market is really doing. But what is clear, in the BEV category nobody has an early mover advantage. Automaker which brings the best product at the right price will take the cake, irrespective of timing, as the market is still in a nascent stage.

Customers looking for a performance oriented SUV still have a good choice in the form of the GLC coupe AMG with a petrol engine. Both offer similar in-cabin space and similar performance. EQC though has better on paper power and torque output, but has a weight disadvantage, hence similar on road performance. Moreover, customers can enjoy petrol powered cars all time without the hassle of range anxiety or time required to charge such a big battery, also save 10% on the on-road price.

What could really change the game is the CKD assembly operation of EQC or for that matter any imported BEV.

Let us have a look at the below illustration of price de-construction. Imported CBU cars with CIF (Cost, Insurance, and Freight) value higher than $ 40,000 attract an import duty of 100%, whereas CKD operation brings down the effective duty to a mere 15%. Also, BEV enjoys a lower GST rate of 5%.

Higher import duty has scared Tesla from selling BEV in India for now. And their past lobbying activity could not yield favorable results.

However, Government stand to not to reduce CBU import duty on BEV seems to be right, as higher duty acts as a tariff barrier and favor local manufacturing – which in turn generates employment and asset creation in India. India has been 5th largest PV market, and local production can have economies of scale. Though luxury segment is small, and it does not need any tax cuts as it is deemed as symbol of conspicuous consumption.

So, if Mercedes Benz India decides to bring EQC as CKD in India, lower custom duty on CKD operation coupled with lower GST rate of 5% on BEV, will make it more appealing than other vehicles, as illustrated below.

Someone has to break – chicken first (market demand) or egg first (product) – conundrum, similar to what Tata or MG did in the mass market BEV category. In fact, as per Mercedes Benz India press announcement, they are trying to bring purpose-built BEV EQS as CKD in Q4 of 2022.