Mercedes-Benz CLK 200 | Shed of the Week 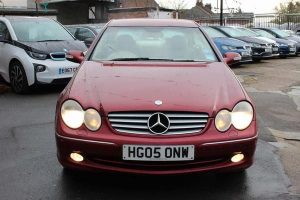 Most of you reading this, especially the young 'uns, will laugh at the idea, but once upon a time people pretended that their cars were better than they actually were. There used to be a roaring aftermarket trade in GTI badges, boot stickers saying that you had disc brakes when you didn't, and doubled-up exhaust tailpipes designed to turn your humble Herald into a much posher faux-Vitesse.

This hankering for bigging up one's part harks back to the pre-Elizabethan codpiece, an item of clothing brought into law by Edward IV to ensure that a man would be able to conceal the 'privy Member and Buttokes' that would otherwise be all too easily revealed by the draughty gap betwixt doublet and hose.

It didn't take long for the codpiece to become a whiffy symbol of virility. You got a big one to make people think you had a big one. More recently, this embiggening technique has been employed by lead singers in rock bands, the thrusting of a pair of socks down one's accoutrements immediately giving the impression, if not the reality, of rampant virility.

For Shed's own part (sic), a life under Mrs Shed's thumb has made him wonder if there might be a place in the market for some kind of modern-day codpiece, but more as a means of protection than as a saucy suggestion of sexual promise. Which kind of gets us round to this week's shed, a Mercedes CLK.

The CLK coupe was one of the more elegant cars you'd find in a Mercedes dealership in the first part of the 21st century. It was a C-Class underneath, but by applying the codpiece principle and dressing it up with a lot of E-Class parts, Mercedes cleverly made buyers feel okay about paying E-Class prices for C-Class metal. The mid-term gen-two CLK that you're looking at here was very much floating in that weird marketing phantom zone between C- and E-Class. The last CLK iteration of 2010-17 was brazenly moved into the E-Class section of the range brochure despite it still being a C-Class at heart, as evidenced by its inconveniently tagnuttish 'C207' internal designation.

The extraordinary gulf between the top and bottom cars in the CLK range was even more pronounced in the C209 gen-two, where the slowest model – the CLK 200 Kompressor, which is what we have here – took more than twice as long to accelerate from 0-62 than the quickest 'regular' CLK, the M156-powered CLK 63 AMG. We're discounting the costly Black of course, which was even quicker.

Which all brings the phrase 'engine transplant' front and centre. With the best will in the world (oo-er, pfft etc) you're unlikely to find a healthy M156 lying around a breaker's yard anytime soon, but a five-second glimpse online will unearth plenty of M113 CLK500 engines going for £600 or less. An M113 isn't the same as a 500hp 6.2 M156, but then what is? At the end of the day it's still a 300hp Merc V8. Shove one of them under the bonnet, stick a fruity pipe on it and you'll be living the AMG life, sort of, and you'd be properly entitled to some shiny new big-up badgery too.

Or you can just leave it like it is and enjoy the far from unpleasant unstressed performance of the supercharged 161hp four. This particular car needs a damn good wash, but the mileage is low and the rust-free MOT is full and as near to clean as makes no difference. Half a day with a small basket of Halfords cleaning products will produce something that looks like it's worth a lot more than the £1,490 asking price – and then it's off to the engine parts section of eBay with ye.