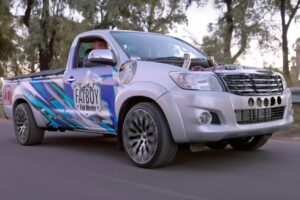 If you thought the new Ferrari Purosangue with its V12 engine and suicide doors was quirky, how about this Toyota Hilux pickup with a twin-turbo V12? The Hilux was built by Fatboy Fab Works, which then decided to use it to compete in South Africa’s Simola Hillclimb. We reckon the owner would get along with Steve Biagioni and his 1000bhp Nissan Navara-R fitted with a Nissan GT-R twin turbo V6.

The owner of Fatboy Fab Works, Francois Fritz, sourced the V12 from a Toyota Century. In stock form the 5.0-litre V12 is good for around 276bhp and 355lb ft of torque, but Fritz’s team stuck on two Garrett GT35 turbochargers upping power to a menacing 563bhp and torque to 715lb ft. With the engine now also kitted out with fully forged internals, the owner reports that it could produce up to 1000bhp when running on a 50/50 mix of ethanol and gasoline.

Fritz says they tried to keep the stock four-speed automatic transmission from the Toyota Century, but it couldn’t handle the power and tended to fail, so instead the Hilux uses a four-speed auto ‘box from a Toyota Supra – which the team plans to eventually swap for a manual. With all this power reaching the rear wheels with so little weight over them in the hard-core pickup, there’s plenty of wheel-spin and donuts to be had.

Fritz says the engine was smaller than he and his team had expected, and they managed to fit it into the utilitarian pickup more easily than expected. Surprisingly, no cutting or modification of the chassis needed to be carried out to get the V12 into the Hilux’s engine bay.

For better stopping power, Fritz’s Hilux uses front brake callipers from the Toyota Fortuner and Vari performance brake discs and pads. The pickup uses adjustable coilovers at the rear, but Fritz says the front suspension setup is mostly stock, aside from a lowered ride height all-round.

The Hilux has a few visual upgrades including a wrap promoting Fatboy Fab Works and some larger aftermarket wheels. Other features that give the Hilux’s modifications away include the twin exhausts poking up out of the bonnet at the front, but aside from that the Hilux is somewhat of a wolf in sheep’s clothing.