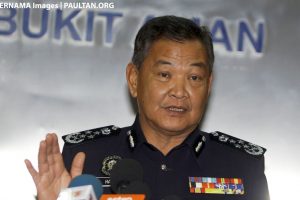 If you are caught for standard operating procedure (SOP) breaches, the fine is no longer RM1,000, but a maximum of RM10,000. The increase came into effect yesterday as the Emergency (Prevention and Control of Infectious Diseases) (Amendment) Ordinance 2021 was gazetted.

All saman issued by the police for SOP breaches will show the maximum compound of RM10,000, but the final amount might be lower, and is to be decided not by PDRM, but by the district health officer. This was explained by inspector-general of police Tan Sri Abdul Hamid Bador in a press conference yesterday, reported by the Malay Mail. “So it is not a case of you automatically being required to pay RM10,000 once you receive the fine. These amounts are ultimately at the district health officer’s discretion. The police are not out to punish anyone, or issue fines and collect money on behalf of the government. We are just the messengers who enforce the law and issue the fine,” he added.

It’s not a blanket RM10k fine, and Abdul Hamid explained that those most likely to pay the maximum saman would be repeat offenders, interstate travellers who end up causing Covid-19 clusters or owners of entertainment outlets operating despite a ban on those establishments. “Even then, it is up to the district health officer to decide the appropriate fine for these repeat and blatant offenders,” he added.

“So you can present your case to the health officers when settling the fine and they can decide the appropriate amount. It could be RM5,000, RM3,000, RM1,000, or they could even decide to impose a fine of RM50 based on their evaluation, or even dismiss the fine completely. Also, these officers are not deciding the fine amounts at their whims and fancy. They too have a set of guidelines to follow,” he explained. The country’s top cop revealed that an offender registry will be set up by the health ministry to allow district health officers to distinguish between repeat and first-time offenders. Once you have been fined by the Pegawai Kesihatan Daerah, your name will be on the registry. If one is unhappy with the fine imposed by the PKD, he/she can present the case to a magistrate.

On why the max amount was set at RM10,000, Abdul Hamid said that it allows the authorities to punish repeat and stubborn offenders, while acting as a deterrent to others.

“MOH data suggests that the situation can go from bad to worse in just a matter of days, like what we saw during the third wave, so (the higher fine) is to act as a warning to those looking to break any laws. I appeal to the people not to panic over the RM10,000 fine; it is not hard to comply with the law so I urge everyone to just resist temptations, such as trying to return to your hometown on the weekend, and follow the SOPs,” he added.

You’ve been warned, so please jangan leka and continue to follow all the SOPs.