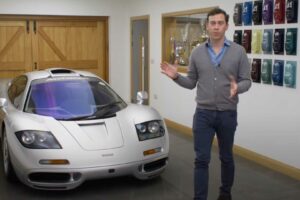 Somehow we want a McLaren F1 even more.

Do you want to know everything about the McLaren F1? Of course you do, it’s not only one of the best road cars ever, but also a Le Mans 24 hour winning icon. When the McLaren F1 debuted in the early 1990s only the ultra-rich had a chance to get an up-close and personal look at McLaren’s first road car. However, thanks to the power of YouTube and the team at DK Engineering in Rickmansworth United Kingdom we get to see every part of this incredible machine.

The McLaren F1 was an ambitious project lead by McLaren and Automotive Design legend Gordon Murray. Murray and McLaren both saw much of their early success in the highly competitive world of Formula One. After years of success in the most competitive motorsport series on earth it was time to share with customers. Enter the McLaren F1 supercar, a road car engineered by an F1 team for driving pleasure.

With its central seating position and unique focus on driver engagement, the McLaren F1 was a breed all its own. Thanks to some lucky rain showers a lightly modified McLaren F1 won the 24 Hours of Le Mans in 1995 outright. The McLaren F1 beat purpose built Le Man prototypes for this historic win which immortalized it as one of the greatest cars ever built.

Sure pedigree is nice but how do you fit the McLaren F1’s custom luggage in its side pod or add new CDs to the 6 disc CD changer? Well, the user guide video by DK Engineering is here to make sure you’re ready to use your McLaren F1 to the fullest. What if you want to open the rear hatch or if you need to fit the front tow hook? Once again DK Engineering has your back so you don’t look like a McLaren F1 novice.