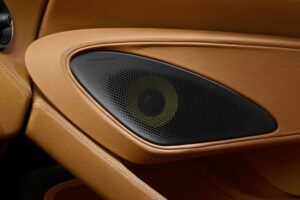 There isn’t really any quibbling about the awesomeness of Bowers & Wilkins. Any British firm dealing in loudspeakers that sprung organically to life in 1966 (the same year as Pet Sounds, Blonde on Blonde and Revolver were released) is automatically endowed with an ineffable sort of cool that most carmakers spend millions trying to conjure up. Consequently, its relationship with McLaren has always made perfect sense, and is rivalled only by Bentley’s tie-up with Naim for title of ‘most appropriate’ in car stereo terms.

Plainly this fact has not been lost on Woking; the carmaker has also been associated with Meridian (a no-less terrific British brand) in the past, but today has announced a ‘strategic long-term multi-year partnership’ with B&W, which apparently elevates the latter to the position of ‘Official Audio Partner’. McLaren says the alliance is built on ‘firm technical foundations’, having worked closely with B&W since 2019.

Physical proximity has probably done the relationship no harm. Woking is just 30 miles from the audio firm’s R&D department in Southwater, and the inclusion of its signature tech – particularly the yellow Aramid Fibre cones – has become an integral part of the McLaren experience. Additionally, the manufacturer notes that the partnership has already expanded beyond traditional applications, with ‘pioneering advances’ like the subwoofers being directly integrated into its carbon fibre architecture to ensure a stiffer mount – and therefore better sound.

“McLaren and Bowers & Wilkins were both founded by similarly minded technical visionaries who always pushed the boundaries of what is possible to create innovative products and experiences,” remarked Gareth Dunsmore, McLaren’s Chief Marketing Officer. “We are, therefore, delighted to be announcing our partnership which builds on the award-winning technical collaboration between our two companies and I’m looking forward to exploring what exciting innovations and products our shared values will create next.”