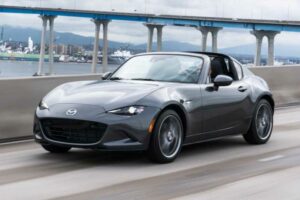 Since its debut at the Chicago Auto Show in 1989, the Miata has been Mazda’s darling. The little sports car revitalized the lightweight roadster concept for the modern era, taking the best from British efforts of years past and pairing it with legendary Japanese reliability. The shift towards electrification in the auto industry has raised questions about the future of the model, but those fears may be overblown. As reported by Autocar, Mazda appears to have a bright future planned for the fun convertible.

Mazda is working hard to transition its lineup to electric drive, with most of its models relying on a large rear-wheel-drive architecture or the company’s smaller front-wheel-drive platform. Hybrid and all-electric models are spinning up on these platforms as Mazda continues to move with the times.

The Miata, however, fits into neither category, being a small two-seater with drive sent to the rear. Built on its own unique platform, it’s also one of the few cars these days primarily sold with a manual gearbox. According to Joachim Kunz, Mazda’s head of product development and engineering in Europe, Mazda is happy to continue along down a similar path in future.

“It’s our brand icon and it is always treated very specially,” Kunz said to Autocar, noting the special place the Miata holds in the Mazda lineup. Speaking on the future outlook for the model, he adds “At the moment, it looks like we will have this car forever, with this size and concept and combustion engine. Of course, some day, we will have to electrify it, but we want to keep this pure concept.”

It’s a positive sign for fans that the company from Hiroshima wants to stay true to the roots of the Miata. In a world where the Mitsubishi Eclipse and Ford Mustang names have been plastered on SUVs, it’s refreshing to see one automotive icon that isn’t being watered down. Building the Miata on a unique platform obviously comes with greater costs when it comes to development and manufacturing. However, it simply wouldn’t be possible to maintain the playful, sporting character of the car if it was shifted to Mazda’s mainstream front-wheel-drive platform to save money.

The Miata, also known as the MX-5, typically runs on a longer lifecycle than most mainstream cars. “Having one generation for 10 years is not a problem for us,” said Kunz. It suggests that a new Miata, likely to be termed the “NE” model, could still be a couple of years away given the ND Miata was released in 2016.

Going forward, it’s likely that the Miata will rely on Mazda’s advanced gasoline engine technologies, like Skyactiv-X, in order to meet increasingly strict emissions regulations in future years. Indeed, patents from Mazda for hybrid drivetrains for a small rear-wheel-drive application have given us our best look yet at the potential propulsion unit for the upcoming NE model.

In any case, the news goes to show that not only does Mazda understand what makes the Miata special, it seems willing to follow through on sticking to that recipe for the foreseeable future. Obviously, with bans on the horizon for ICE engine vehicles, one day the Miata will have to change, but for now, all is well in the House of Roadster.