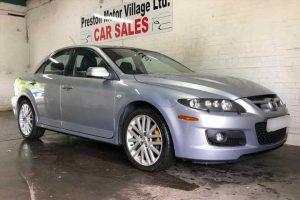 Perhaps nothing shows how quickly tastes can change in the automotive world than the demise of the sports saloon. Once upon a time it was the fast four-door that seemingly everyone aspired to, the halo atop a humdrum range drawing much needed attention to a franchise showroom usually brimmed with mediocrity.

A lot of manufacturers tried their hand at it, various VXR Vauxhalls, ST Fords, Saab Aeros, T5 Volvos and even Subaru Legacys attempting to lure customers away from the German alternatives with their take on practical performance. And then there was Mazda's interpretation: the 6 MPS.

It seemed the 6 occupied a clever a little niche on its launch in 2006. Because with its Japanese heritage and turbocharged four-cylinder engine, it might have suited those who had matured out of the rally replicas. Moreover, its four-wheel drive gave it traction and composure missing from what could be quite lairy front-wheel drive alternatives. Plus, of course, it was an awful lot cheaper than some of the German alternatives – £23,950 would not have bought 260 BMW horsepower 15 years ago.

The 6 was received pretty well, too, with both its clever all-wheel drive system (including a rear limited-slip diff) and performance coming in for praise. Quality was good, the 6 looked smart and it was well equipped – so what happened?

The market shifted, of course. Even by the time of its introduction, the writing was on the wall for the mainstream sports saloon. And despite Mazda flying high with cars like the RX-8 and MX-5, the badge didn't fit either. Not with the mainstream buying public's idea of what a four-door performance car should be. Moreover, there's no denying the additional practicality that's afforded by a hatchback bodystyle, either – or an SUV one…

Be that as it may, those still intrigued by the concept should find plenty to like about this particular 6 MPS – not least because it's for sale at just £5,495. It's covered 67,000 miles from new and has been serviced 10 times over that period, eight of those with a main dealer. It appears to scrub up okay inside and out, too – and with the all-wheel drive usability factored in, the MPS perhaps has more going for it now than ever before. You're not likely to see another every day, either.

Frustratingly, as a 2007 car and with a 245g/km CO2 rating, this 6 will cost more to tax, which could put some off what is an otherwise enticingly cheap car. As will a 27mpg average. But then they're only comparable with rivals of the time, so it's hardly like a contemporary BMW, Ford or Volvo would be significantly cheaper to run.

In fact, the 6's appeal is almost unchanged 15 years after launch: for under-the-radar performance that costs not a lot of money, you can't do much better. In a car world that now seems a lot more about show than go the MPS might be less popular than ever – but if anything that only serves to make it more likeable to the few. Don't forget that BBR can make it go a bit quicker, too…