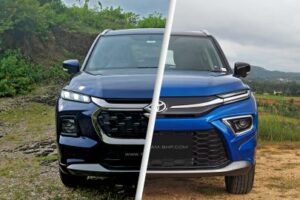 If you plan to get a strong hybrid SUV, would you buy the Toyota Hyryder or Marui Grand Vitara.

BHPian ajayc123 recently shared this with other enthusiasts.

Strong Hybrid* is a new creature that has arrived in the country in 2022.

*technically we had a couple of items like the Camry and Vellfire around for some time, but far from the mainstream awareness.

We are honoured that Toyota has considered India to be worthy of this species of vehicle after gaining worldwide experience in over 140 countries and 25 years of maturing this technology. With such a diverse experience across all terrains, and refinement over decades, the fine drivetrain (think of it like fine wine matured over decades) has arrived. Only after so much experience and refinement did Toyota dare to release it to the connoisseurs that we are.

The launch of the vehicle has been happening forever, and news bytes about booking numbers have been flowing steadily and keeping volkman10 pretty busy, and even a lot of us have beaten the subject of the strong hybrid to death.

Many of us have been info-taining ourselves about this new creature out of curiosity, and then there are other members in foreign lands who have “been there, done that” (i.e. actually driven or experienced hybrid) who have been generously contributing to the discussions. We have discussed a lot of things under the sun about the strong hybrid including but not limited to:

Honda City e:HEV (strong hybrid) was also launched recently but has received a very tepid response. On the contrary, Toyota and Maruti have been marketing a really solid booking pipeline, and now it’s time for the people to show their wallets (or hide them / take them elsewhere). And this is a thread to unravel the thinking in the minds of the esteemed members of this coveted Team BHP community [you require more attempts to join TBHP than to join an IIT ]

Here’s what BHPian Malyaj had to say on the matter:

Not buying hence not voting. But:

After sitting on the fence for a considerable time and at considerable discomfort to the metaphorical posterior, I am almost on the verge of withdrawing from the search for Shangri La, a.k.a the perfect car. Though neither Maruti nor Toyota asked me to wait this long, I gave respect to the seniors and waited it out to see what sage advice comes from their quarters. Turn September and the advice was ‘Kafi deti hai’, and that panoramic sunroof addresses all of life’s anxieties.

I wish I could go back in time, stand in a mile-long queue and plonk my money on the desk of uninterested Kia/Hyundai salespeople. At least I would have been halfway through. The enthusiastic salesman from Toyota messages me every now and then to tell me that if I book N-O-W, I might get the vehicle in March ’23. Sorry, that was last month, now it is April’23. Considering the rate that everyone in our family is putting on weight, the Hyryder back seat may become inadequate for us.

On a more serious note:

Here’s what BHPian bijims had to say on the matter:

The Toyota Urban Cruiser Hyryder Strong Hybrid S variant seems to be the most value-for-money Hybrid and I am switching over to it over the Maruti Suzuki Grand Vitara whose Hybrid prices seem to be a bit high. The Rs.50,000 premium over the Toyota Hybrids doesn’t seem justified. Moreover, with manufacturing being at Toyota’s plant and Engine also from Toyota, I had a feeling the Strong Hybrid of the Toyota would land up cheaper, adding to that Toyota offers the Strong Hybrid from one variant above base spec whereas Maruti offers it only on the top two trims.

Hence, the Toyota Strong Hybrid wins it for me is the more accessible one of the lot.

Here’s what BHPian dr_TJ had to say on the matter:

Don’t know why I was still holding on to my Grand Vitara pre-booking even after Hyryder Mild Hybrid V AT price reveal. And subsequently the expected pricing of Grand Vitara.

Expected pricing stands true now. And I cancelled my Grand Vitara pre-booking today. Immediately after I saw the price list.

Not worth the premium over a Brezza or XL6 for me.

Here’s what BHPian baarish84 had to say on the matter:

I am keeping the booking of the Hyryder Strong Hybrid V variant.

I have cancelled the booking of my Grand Vitara strong hybrid alpha variant.

Here is my thought process:

I think of myself as a sedate driver. I am in the market for a car with a budget of 22L OTR.

For the last 12 years, I have been driving almost exclusively in my hot/humid city with bumper-to-bumper traffic. I hardly go on Highway road trips.

My requirements for 12K annual running, with preference sequence:

What I am specifically trying to avoid:

Really I see Hyryder as the only viable option.