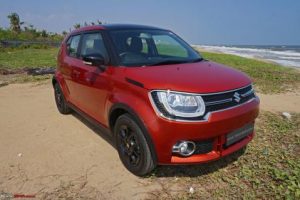 The steering has no automatic returning ability. The car holds its line and continues to turn.

Doesn’t Maruti have ONE steering expert who can step in & fix this for all their cars? Why are they selling thousands of defective cars each month?

From our Official Review:

The S-Presso comes with electric power steering. It is weird, poorly calibrated and feels more like a Mahindra-tuned steering than Maruti (surprising because Maruti steerings have usually been fuss-free to use). At parking speeds, the steering should have been lighter. Some people, including women, will feel that they would have to put in a little more effort than they wish. It’s a simple fix really. Maruti should have taken care of this. The EPS is a bit vague at some speeds, and a bit too sensitive at others. A regular Joe may not notice these inconsistencies with the steering, but a BHPian who drives it for 300 km most definitely will. The steering also lacks self-centering. On a long left-hand curve of the highway and another on the Sealink bridge, GTO left the steering in the middle (of the curve). Guess what? The S-Presso held its line and continued taking the turn perfectly (the steering didn’t center back at all!!). In another instance, he took a right turn at a signal and after the turn, he left the steering. It stuck to that right turn position only. He had to manually straighten it. GTO’s antique Mahindra Jeep steering needs the same straightening after a turn. We’ve hardly driven any modern car that behaves as strangely as this.

And now, a flabbergasted Ashis Mishra writes in seeking advice:

I have purchased a Maruti Ignis Zeta AMT (Petrol). I found the steering to be sticky, having no automatic returning ability and it sticks on U-turns. They said being new, the EPS is sticky and will be ok after 500 – 750 km.

After that continuously, I sent it to the service centre and they say it should be okay after 3000 km. But the vehicle crossed 8700 km and still, the steering is sticky and on U-turns, it sticks at one point with a noise!

So recently, I sent an email to the Maruti Suzuki CEO and after that, I got a call from their RSM. Their local service centre’s technical expert came for inspection and made a thorough driving test. He then said it has a defect which may be fatal as the steering is very stiff & sticky which isn’t normal and needs some part replacements. They then picked up the car and checked the bushes, shock absorbers etc and informed me that the steering return ability issue could not be resolved for which they kept the car for one more day to inspect the entire steering column.

Later was told that the problem is resolved and they are arranging for delivery. When I received the car, I went for a test drive with the technical expert. No effect was seen. It was with the same sticky, stiff steering with the same zero-return after turning.

The technical expert said he will change some parts and to wait for 7 to 8 days. But the very next day, the RSM called me and sent an email stating this is a feature of the car and the steering behaviour is better in upgraded vehicles.

Now, as this steering behaviour is quite abnormal, I request you to kindly advise me what action should I take so that Maruti will accept it as being faulty, and correct the same because my Ignis is under warranty.