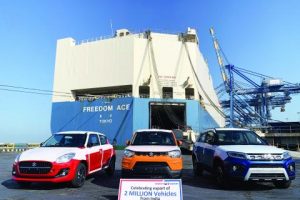 Maruti Suzuki has announced that its overall exports from India have crossed the 20 lakh unit mark with the latest shipment comprising of the S-Presso, Swift and Vitara Brezza cars. The shipment is bound for South Africa.

Maruti Suzuki commenced export of vehicles in FY1986-87. The first large shipment of 500 cars was shipped to Hungary in September 1987.

In FY2012-13, the carmaker achieved the milestone of 10 lakh exports. Out of these, more than 50% were exported to Europe.

Maruti Suzuki achieved the subsequent 10 lakh in over 8 years. This time, the company focused on emerging markets in Latin America, Africa and Asia. The carmaker has a sizeable markets share in Chile, Indonesia, South Africa and Sri Lanka, where models like the Alto, Baleno, Dzire and Swift have gained popularity.

From January 2021, Maruti Suzuki started building the Jimny in India. With India being its production hub, the off-roader is being exported to international markets.