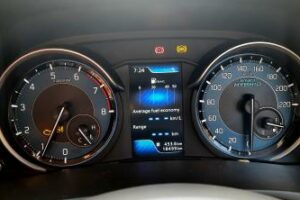 The steering also becomes hard and even the start-stop button fails to respond.

BHPian Zen_forever recently shared this with other enthusiasts.

My 2019 Maruti Ertiga has done about 19k km, most of it was on highway runs with family and friends and all drives were without any incidents except two.

On 2 occasions, I have had all the warnings on the dash light up, like check engine, abs, power steering and both times it was after traveling at least 300+ km.

1st occurrence April 21, ~15k km: We were returning from Mysore, stopped for dinner, everything was normal till then. After dinner, I start the car and it indicates all the warnings.

Steering was hard, I try switching off the car but the start-stop button was not responding. All electricals were working including headlights and AC, got everyone out, opened the bonnet, and everything seemed fine. After 5 min or so, the stop button worked and the car was finally off. Restarted the car after 15 min call with Mandovi, warnings were gone and we were able to drive back without any issues.

Physical inspection revealed nothing, histories were cleared, and they suspected it could be the battery. I was told it was fine to drive and it was till Mar 22, ~18k km. We were returning from Melkote. After a quick stop, started the car and all the warnings were on. Start-stop button didn’t respond for 10 min, it was the same issue repeating. Next day at ASC, OBD scan revealed the same errors as before.

This time they checked battery voltage, water level in all 4 cells, and all was normal and returned the car saying everything is good.

Both the times it happened after long drives, warning for all critical components like ABS, Steering and Engine is worrying.

How do we find the cause? Did anyone else has faced similar issues?

Here’s what BHPian Kosfactor had to say about the matter:

I have seen this happen on certain other vehicles with Push-button start, the culprit was the ABS Sensor wiring being chewed off by a rat.

Vehicles with Push-button start need to know the vehicle speed before starting or stopping the engine, door locks and many more. If even a single ABS sensor is malfunctioning it would light up the instrument cluster and everything will act funny.