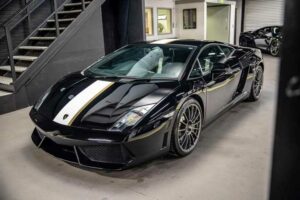 There's no such thing as the perfect supercar; some get very close, though

Only very special people have cars named after them. The vehicle itself may be utterly awful – looking at you, Citroen C4 Loeb and Fiat Stilo Schumacher – but there’s no way any old Tom, Dick or Harry gets a badge in their honour. Cars named after racing drivers or similarly famous folk ought to be really special, to celebrate properly the achievements of those people. Or why else bother?

The Gallardo Balboni was a very special car for a very special bloke. Lamborghini’s limited motorsport presence until recently meant that, come the end of the 2000s, chief test driver Valentino Balboni was the biggest star Sant’Agata had a close relationship with. He’d been there for 40 years and signed off all the icons, so something incredible was needed for his retirement gift. It wasn’t going to be a watch.

Predictably, Balboni loved rear-wheel drive cars; at the time, Lamborghini didn’t make any, with both Gallardo and Murcielago offered exclusively with all-wheel drive. So a rear-drive Gallardo was created, the LP550-2 ‘Valentino Balboni Edition’, a production run of 250 cars announced, meaning the old man could sign off in considerable style. While that isn’t the entire story (a non-VB LP550-2 joined the range once the special edition was sold out), the Balboni is certainly one of the more interesting cars dedicated to a person.

Moreover, the Gallardo was brilliant. It built on the success of the regular car and its worthwhile LP560-4 facelift in 2008. The Balboni benefitted from a bit less weight, and retuned springs, dampers and anti-roll bars to take full advantage. The limited-slip diff was also given the once over as it was to be doing all the heavy lifting for the glorious V10, and the ESC was reworked to allow some more silliness in Corsa mode. The press release actively encouraged what everyone was thinking: “Rear-wheel drive has a special appeal to those sports car drivers who enjoy a particular driving style. Thanks to the eminently powerful V10 driveline, controlled oversteer is no problem – naturally always to the extent defined by the driver”. The first drive reviews were gushing; far from an intimidating monster like Lambo supercars of old, the Balboni was the best Gallardo yet. And it was pretty good to start with. All with a price tag of less than £140k, which actually undercut the four-wheel drive model.

The Gallardo VB had future classic written over it from day dot, especially those few cars – just like this one – with the six-speed manual gearbox in place of the e-gear. You sense it’s the gearbox Valentino would have opted for. Exact numbers are hard to come by, but it’s believed just three UK manual cars were allocated from that total global run of 250. Even if that’s not quite correct, there’s no doubting this is an extraordinarily rare car; there are way more all-wheel drive Gallardos than rear-drive, more LP550-2s than limited run Balbonis, and more e-gears than manuals. They very seldom come up for sale.

After all, why would you get rid? Manual Lamborghinis didn’t last much longer than this car, and the Balboni – with its stripes and limited run status – will always have a special appeal. This one has covered just 17,000 miles since 2009 and has a full Lamborghini main dealer service history. All that means there’s a premium to be paid, this Balboni for sale at £190k when a regular two-wheel drive model (albeit with the e-gear) could be yours for less than £100,000. But then that car isn’t the limited edition, it isn’t the Balboni tribute car, and it doesn’t have a manual gearbox. Don’t be surprised if a Lamborghini aficionado snaps it up soon to have in their collection alongside a Diablo GT, Countach LP5000 and Miura SV; all cars that Balboni had a hand in.