Home » Auto News » Man Wins Corvette in Lottery, Lottery Can’t Find One to Give Him

Man Wins Corvette in Lottery, Lottery Can’t Find One to Give Him 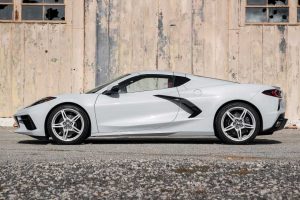 It’s a classic tale, really. Man sees lottery giving away a Chevy Corvette and some cash. Man purchases scratch-off lottery ticket hoping to win said Chevy Corvette and some cash. Man wins the lottery—but the lottery can’t source a Corvette for the winner, and now lawyers are involved and you’re reading about the whole kerfuffle here. So maybe that isn’t a tale as old as time, but it sure is kind of amusing. Really, how could the Georgia lottery not have lined up a Corvette for the ultimate winner of its Corvette giveaway ahead of time? It’s like the U.S. Treasury sending you an I.O.U. for your tax return because it forgot to print checks.

Expectant new Corvette owner Dennis Kahler won the lottery fair and square, and according to the Corvette Forum where this is all laid out, his win was acknowledged in a letter from the Georgia Lottery. He also was told that he could choose his Corvette, which could be valued at up to $107,000. (He’s entitled to whatever’s leftover in that budget as cash, should he choose a Vette that costs less, plus the originally promised $250,000 cash prize.) The lottery was supposed to work with Kahler to source a Corvette—but that turned out to be not as simple as we figure the lottery people thought it might.

You see, the C8 Corvette is a hot commodity. Sure, it debuted for the 2020 model year, and 2021s are incoming, but this is a new Corvette and the first ever with its engine in the middle. It’s a historic car (the entire 2020 run sold out early), and people are banging down Chevy dealerships’ doors for the 2021 models. So, naturally, the Georgia Lottery is having some trouble finding a dealer that can supply its winner, Dennis, with a Corvette of his choosing. One dealer apparently tried to sneak in a massive markup—$10,000—that Dennis wasn’t willing to cough up on principle alone. Other dealers were more polite, offering at-sticker pricing, but couldn’t promise a car before the third quarter of this year, and even then, availability was hardly guaranteed.

As we mentioned, the lawyers are involved now. There’s no telling what the outcome might be. After all, did the lottery promise a car within a certain period of time? How, even if forced to gather up a car, will it even find one? In the meantime, there is Dennis, who is owed a Corvette and for the time being, just has to sit and wait like everyone else eager to snap up one of Chevy’s near-exotic sports cars. Hey, so long as the lottery gets him his $250,000-plus while he waits, maybe a little patience for a free Corvette is called for.