Home » Auto News » Making a Big German Sedan Light: The First A8 Introduced Us to the Audi Space Frame

Making a Big German Sedan Light: The First A8 Introduced Us to the Audi Space Frame

We take aluminum body components in cars for granted today, along with a whole range of other materials scarcely seen in vehicles just a couple of decades ago. But when it comes to aluminum, there were just a couple of automakers that played a role in making the material mainstream in car production today. And their first models could not be more different.

Honda was first to market a car that featured an all-aluminum body, launching the Acura NSX (or Honda NSX, as it was badged in most of the world) in 1990. The everyday supercar, as it became known, was as famous for its aluminum body as it was for its midengine layout and affordable price, with a 3,010-pound curb weight as the payoff. The two-seater won acclaim for its innovative engineering, as well as its handling, pairing a V6 engine with a clever suspension and a sleek profile.

Audi followed with a very different car—an executive sedan. The A8 was a quick follow-up to the big and heavy V8 sedan, which was produced for a relatively short period of time. Debuting at the 1993 Frankfurt motor show, the A8 made a big splash for Audi for a number of reasons. 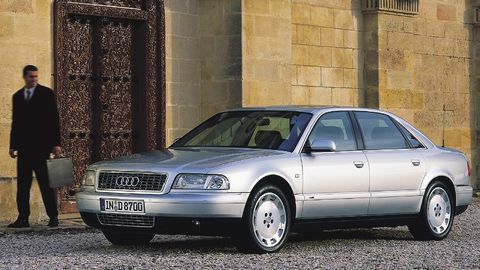 First of all, the A8 was Audi’s new flagship, designed to take on the likes of the BMW 7-Series and the Mercedes-Benz S-Class in a way that previous large models from Ingolstadt really did not. The V8 that debuted five years prior built upon an earlier design aesthetic and used a stretched version of the C3 platform, used in models like the Audi 100 and 200. Codenamed D1, the V8 was really an accumulation of Audi tech and engineering of the 1980s paired with a choice of a 3.6- or 4.2-liter V8 engines. In that sense, it was an apotheosis of the engineering solutions applied to a whole range of large Audi models offered throughout the decade. And despite its technical competence and achievements in motorsport, thanks to the talents of Hans Stuck, it did not make a splash in the marketplace during its production run. The D1-generation V8 sedan, of course, was hurt by an economic downturn, as well as a major setback in the U.S. market, but the consensus at the end of its production run was that even though it advanced Audi’s standing as a luxury brand in Europe, elsewhere in the world it did not really make the charts. The V8 sedan was also effectively upstaged immediately after its debut by the Lexus LS, which had arrived on the scene in 1989 and quickly won over customers, as well as the automotive press.

The 1994 A8, codenamed D2, was intended by Ingolstadt to be different in every way from its predecessor, but still recognizable as an Audi model. Penned by Dirk van Braeckel and Chris Bird, the new luxury flagship was styled conservatively but elegantly while giving little clue as to the technology underneath, which took over a decade of planning to execute on a mass-production scale. 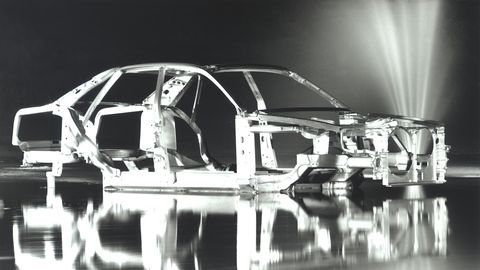 “For the first generation of the Audi A8, the company once again completely reinvented the unitary body—using aluminum as a material and a concept tailored to the lightweight metal,” Audi said. “The development work, which got started in 1982, yielded 40 patent applications. In the role of the production model’s forerunner was a technical study with the ‘ASF’ designation, which caused a sensation at the 1993 IAA—its unpainted body of polished aluminum gleamed like silver.”

Underneath the aluminum skin was the Audi Space Frame, weighing approximately 40% less than an analogous steel frame and using new construction methods that Audi had spent most of the previous decade developing. The Audi Space Frame used a high-strength aluminum framework with sheet aluminum pieces integrated into it, performing a load-bearing role. Audi used a mix of welding, self-piercing rivets and adhesive bonding, with self-piercing rivets making their first appearance in the car industry. The body itself weighed just 549 pounds, while the lightest A8 variant in the lineup, a short-wheelbase non-Quattro A8 with a 2.5-liter TDI engine, tipped the scales at just 3,593 pounds. U.S. models equipped with the 4.2-liter engine and quattro all-wheel drive were a bit heavier, as expected, but still landed at 4,068 pounds in a 2000 model year sedan.

Weight savings was the primary goal of aluminum in the A8—it featured quattro AWD, which came with a weight penalty—but the material also lent more rigidity to the frame, offering sharper handling. 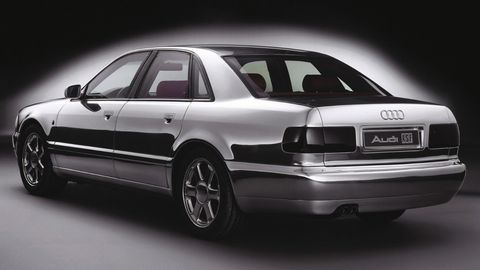 “The basic structure of the Audi Space Frame (ASF) resembles a skeleton or the framework of a timbered building,” Audi said. “What makes the space frame principle so impressively elegant from a technical perspective is that it separates the tasks of the various components of the body. The extruded sections bridge spaces, the cast nodes connect the components, the aluminum panels close off the spaces and lend rigidity to the framework. The space frame principle assigns a specific task to each material and each component. This gives the development engineers a great deal of design freedom.”

The A8 landed in the U.S. quite late: The model debuted in 1997, three years after it went on sale in Europe and other markets, equipped with a 3.7-liter V8 in its first year. The reason was that American car buyers were still thought to be skittish of large Audis, and indeed it took Ingolstadt the entire decade of the 1990s to regain its standing in the U.S. The 4.2-liter A8 arrived in U.S.-market models in 1998 to slightly warmer sales, but Audi wisely did not offer the range-topping 6.0-liter W12 in the model in America. The V8 and W12 were not the only engines on the menu in Europe for the A8: Audi also offered 2.5- and 3.3-liter diesel engines, and 2.8-liter V6 gasoline units.

Sales of the A8 were a success in Europe, but for the D2 model they amounted to just a few thousand units per year in the U.S.—far from the levels that Audi currently enjoys. Part of the reason was that American buyers were still getting used to the concept of a large and expensive Audi sedan at the time, in a much smaller dealership network compared to the late 2010s, while offerings from Lexus, Acura and Infiniti offered plenty of competition for customers’ wallets.