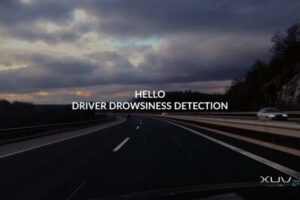 Rumours suggest that the XUV700 could be launched in the Indian market on August 15, 2021.

Mahindra has released a new teaser video, showcasing one of the safety features on the upcoming XUV700. The latest video talks about the SUV’s Driver Drowsiness Detection System.

Mahindra hasn’t revealed details of how the system works in the XUV700. The video only mentions that the system “notices” when the driver starts to doze off and “nudges” him / her.

Drowsiness detection is a fairly common feature in high-end cars. It uses a camera to monitor the driver’s face for fatigue and can alert him or her by vibrating the steering wheel or through an audible notification.

The drowsiness detection system is expected to be one of many safety systems that will be part of the XUV700’s advanced driver assistance suite. The car will also come with Auto Booster Headlamps and Personalized Safety Alerts.

The Mahindra XUV700 will be offered with two engine options – a 2.2-litre diesel and a 2.0-litre turbo-petrol engine that is said to be the most powerful in the segment. Both engines are expected to come with a choice of a manual or automatic transmission.