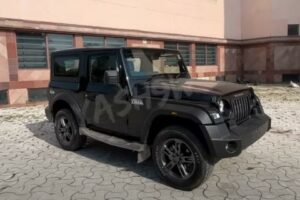 The traction control and hill descent control buttons have now been repositioned.

Mahindra has made some changes to the features and colour palette of the Thar. The SUV now comes with the new twin peaks logo as well.

As far as colour options are concerned, the Rocky Beige and Mystic Copper shades have been discontinued. The SUV is now available in four exterior colours: Napoli Black, Galaxy Grey, Aqua Marine and Red Rage.

Under the bonnet, the Thar gets a 2.0-litre petrol making 150 BHP and 320 Nm and a 2.2-litre diesel producing 130 BHP and 320 Nm. Both engines are available with either a 6-speed manual or a 6-speed automatic transmission.