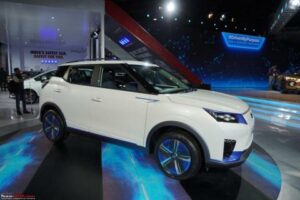 The eXUV300 is expected to compete with the Tata Nexon EV Max and MG ZS EV.

Mahindra has confirmed that the eXUV300 electric SUV will go on sale in the Indian market in the first quarter of next year. The carmaker plans to unveil its range of Battery Electric Vehicles (BEV) SUVs on August 15, 2022, and the eXUV300 is expected to be one of them.

However, details of the production version are scarce. That being said, Mahindra has revealed that the eXUV300 will measure 4.2 meters in length, making it slightly longer than the ICE version which is currently on sale.