Mahinda Bolero Neo teased ahead of its launch 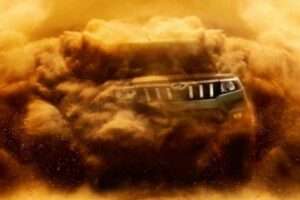 The Bolero Neo could be offered in three variants – N4, N8 and N10.

Mahindra has released a teaser of the upcoming Bolero Neo. The SUV is expected to be launched in the coming weeks.

The teaser shows the Bolero Neo appearing through a dust cloud. The caption reads – “Dare made it to our dictionary. Fear couldn’t.”

The Bolero Neo is essentially an updated TUV300. It is expected to be positioned above the standard Bolero. Also, reports suggest that the SUV could be offered in three variants – N4, N8 and N10.

The Bolero Neo gets a redesigned front fascia that features a revised grille and headlamp clusters as well as a new front bumper that houses a pair of fog lamps. On the inside, the SUV is expected to receive minor changes like a new infotainment system and seat upholstery.

Under the bonnet, the SUV is likely to get a BS6-compliant 1.5-litre diesel engine, mated to a 5-speed manual transmission.