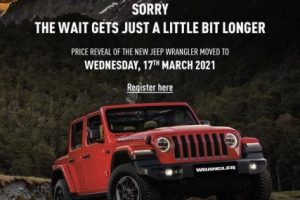 The prices for the locally built Wrangler will now be announced on March 17, 2021.

Jeep has postponed the launch of the locally assembled Wrangler by two days.

Jeep has stated that the launch of the made-in-India Wrangler had to be rescheduled due to “some organizational priorities”. The prices for the locally built Wrangler will now be announced on March 17, 2021.

Jeep had commenced local assembly of the Wrangler last month. The SUV is being assembled using completely knocked down (CKD) kits.

The Wrangler is powered by a 2.0-litre, 4-cylinder petrol engine that produces 264 BHP @ 5,250 rpm and 400 Nm @ 3,000 rpm. The engine is mated to an 8-speed automatic gearbox and a Selec-Trac full-time four-wheel drive system. The Rubicon uses the same engine and gearbox combination, but is a more rugged version of the standard SUV.