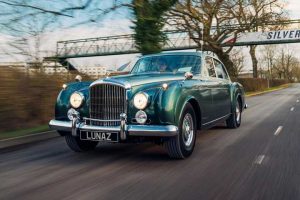 Thought the Rolls Royce EV was audacious? You ain't seen nothing yet

There will be a lot more news like this from Lunaz over the coming months and years. Not only has its first electric Bentley just been completed – more on that in a sec – it's Silverstone manufacturing base is to grow by 500 per cent in size and its number of jobs is to double this year. The appetite for electrified classics, it would seem, is not letting up one bit – even when they cost hundreds of thousands of pounds.

Lunaz's latest is a 1961 Bentley S2 Continental Flying Spur by H.J Mulliner, which will kick off its electric Bentley range after "overwhelming customer demand". It will use the Lunaz proprietary electric powertrain which, in the Rolls-Royce conversions, was offered with either 80kWh or 120kWh batteries. As with other Lunaz commissions, the Bentley has received a bare metal restoration and "full modernisation" – including better brakes, steering and suspension – as part of the project; the green car seen here will be used daily and thus has child seats integrated in the back as well as Apple CarPlay functionality.

This is just the start for Lunaz Bentleys, too. It has production allocation for two- and four-door S1, S2 and S3 Continentals, and will convert the Continental Drophead Coupe as well. Customers have even been in touch to have James Young cars reengineered.

Like the Rolls-Royce, however, a fully restored electric Bentley from Lunaz doesn't come cheap: prices start at £350,000 before tax, depending on the car being restored. That said, demand clearly exists: the proprietary powertrain is being lined up for additional installations (including up-cycling ICE fleets), the company's 8,000 square foot headquarters is growing to 40,000 square feet and recent recruits have come in from names like McLaren and Prodrive. The market for, as Lunaz puts it, "furthering the legacies" of classic cars, is growing, and growing fast – expect many more conversions to be unveiled as 2021 unfolds.