Lucky charms | Cars that brought good luck to their owners 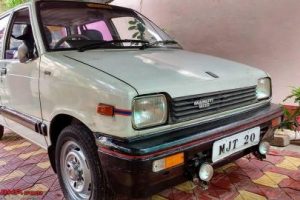 This nearly 34-year old, very rudimentary car still does its duties for me whenever called for and never fails to impress me more and more, with its unfailing loyalty and reliability.

BHPian anjan_c2007 recently shared this with other enthusiasts.

A majority of car owners slot cars as machines that are owned by them and move them from place A to place B and nothing more. We Team-BHPians would always vie with the fact that though cars are lifeless pieces in metal (and plastic these days), they do have a soul and the fact that they are our family members. We get attached to our cars in no time and owners like me never dare to ever think of swapping or selling cars, simply for the fact that these are a part of our family and very much our family member.

Coming to my lucky car, I would rate my 1987 Maruti 800 SB 308 as my lucky car. This nearly 34-year old, very rudimentary car still does its duties for me whenever called for and never fails to impress me more and more, with its unfailing loyalty and reliability. It has been a harbinger of good luck for me, during umpteen occasions and I would like to list a few of its achievements that make it rate it as “you’re the best.”

My late father, late grand aunt, our family’s late and most favourite pet GSD “Soni” and many more relatives and friends have travelled in this car. The Late Dr Shrikant Jichkar, ex- M.P. and Maharashtra Minister (also ex- IAS and IPS), my friend and classmate from school, who is still the most highly qualified person in India, has travelled in this car on a few occasions. Mr Banwarilal Purohit, the present Governor of Tamil Nadu has also travelled in my car to attend a meeting, where we had invited him as Chief Guest, and when his personal car had failed. He was an ex- M.P. then.

Coming to the good luck my car has brought our family, these are mostly during its performance of duties as an ambulance (its white in colour too) on many occasions. Our pet GSD “Soni”, born in 1982 would go for several happy rides with we all family members in this car. She became weak by 1995, due to her age and required regular hospital treatments including one successful, major operation. This Maruti was the ambulance for her. She recovered well, but succumbed to dehydration on May 26, 1996.

My daughter was born in 1999 and when my Mrs stepped out of the Nursing Home with the little babe, this Maruti was in the hospital porch to welcome them. So its this car for our daughter’s first ever journey into the big world. She is doing well in life.

Next, my aged mother suffered a major health condition in 2011 and had to be hospitalised for about ten days. Medical check-ups were regularly required thereafter. The trusted ambulance did its duties all through. She is doing well health wise thereafter, and is now aged 87. Touchwood! And on 17.03.2021, we got a slot in a nearby nursing home for her first dose of the Covid vaccine. I again used my lucky Maruti for this job. Needless to say, she stepped out on the wheelchair from the car, got the jab, waited for the mandatory half an hour on the wheelchair. Thereafter, she was back to the car. Ingress and egress for older persons is quite easy on the Maruti 800, perhaps the easiest from among all cars and the front passenger seat is quite preferable. SUV’s are the least preferable. She has had no post-jab complications of any kind whatsoever, other than some pain in her shoulder for the first two days. That’s again good luck for the family.

There are many, many more anecdotes for this great, little car. No wonder it has served me for nearly 34 years without fail and will go on and on. With its aftermarket post 1994 front grille – trying to look younger.