Living with an Enyaq | PH Footnote 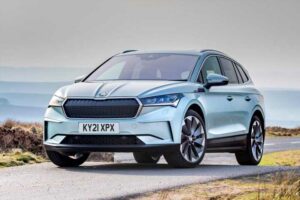 We know EVs work perfectly well in their comfort zone, so what about out of it? To the countryside…

This isn’t a conventional review of the Skoda Enyaq because, quite frankly, it wouldn’t be very long. It’s very similar to the VW ID.4 and drives very similarly too, the buying decision between them set to be about image, looks and price, more than it ever has been with cars of shared underpinnings.

Instead, a more thorough test for Skoda’s EV SUV than a drive to the charger and home again; it would be weekend transport for my girlfriend Alice, my dog and I for a weekend back home in Suffolk. Where there isn’t so much as a motorway, let alone a rapid charger at a services. But plenty of people to visit, miles to cover and questions to be answered.

The first being why this stupid, hateful touchscreen doesn’t work. It’s completely unresponsive, meaning no possibility to pair a phone, switch drive mode, change radio station or even adjust the air conditioning (there is a hard ‘Clima’ button, but it’s a screen shortcut). Eventually the voice control turns the A/C off before we freeze and 38 presses of the skip button finds a tolerable radio station, but the Enyaq is not off to a good start. Especially with general cabin quality not all that great. Still, 252 miles with the larger 80kWh battery is useful (against a 333-mile WLTP claim) – so why is the range readout so small?

The screen still doesn’t work. Imagine this happened on a test drive. Phone is in the cupholder to try and find us a route of Dante’s North Circular of Hell.

The Enyaq is a lovely motorway car, it turns out. There isn’t much in overtaking urge, but that’s ok given how the range plummets at high speed. It’ll sit at 70mph far more quietly and comfortably than any petrol-powered SUV like this I can think of, even on 20-inch wheels. Given these will surely be used for family trips to grandparents, theme parks and holidays, that will count for a lot. As will the storage – there are bins and cubbies everywhere. One behind the dash holds a whole 150g bag of Kettle Chips, which is handy.

Guess what! Still no joy with the screen. It’s getting very hot, too. The radio keeps dropping out. Alice wishes we’d taken the Civic Type R. And she really doesn’t like that car.

The 55 miles or so from here in stop-start driving (which really suits an EV, especially with the regen braking being used here) has taken nearly exactly that from the range, with 187 miles left. Plan is to juice the Skoda here with the newly installed BP Pulse while scoffing McDonald’s.

The charger is being used by a Nissan Leaf. ZapMap says it’s been there four minutes. Sob.

The Leaf leaves! But it’s only been there a few minutes. Does the charger work?

After some arguing with it (because I’m stupid), the charger works! It’s a 175kw, too, so we’re soon adding something in the region of 160 miles per hour. I haven’t renewed my BP Pulse membership, so the price per kWh is more, but £7 adds 60 miles or so. Perhaps most importantly, it was really easy. The only real disappointment is that McDonald’s are out of Chicken Selects.

Maybe I’m getting old, but there’s something quite appealing about silently cruising through a rural village when most of the residents are in bed. The Skoda green mood lighting lifts the cabin ambiance nicely. Alice’s grandad has a Yeti and much prefers his ‘proper’ Skoda. Tough crowd. But imagine an Enyaq Scout, jacked up and cladded like the Octavias we all loved. That might be cool. For now, it manages to somehow look generic in a sector that’s quite newly established, the giant fake grille the clearest Skoda giveaway.

10:34am, Saturday, somewhere else in Suffolk

The screen works! Back in business baby! Look at my smart A/C, Individual drive mode and DAB radio, people! Seriously, though, how can a car’s main interface fail for three hours?

Family visits mean flitting around in the lanes, a task that the Enyaq is well suited to. Its sheer size can make things tricky, but visibility is good, the regen braking is predictable and reassuring, the steering accurate and the willingness to turn of course helped by having so much of the weight at wheel height. The 20-inchers themselves feel a tad too big though, especially with the suspension any firmer than Normal.

The haircut I’ve booked is many more miles away than I thought; the fear is irrational, because 150 miles is loads, but I keep checking it. And the screen makes my eyes hurt. The turning circle is great for parking; the size isn’t.

Barbecue number one. My friend has a Velar and I honestly think there might be more space in the Skoda. She shows little interest, because ‘Skoda’ and ‘EV’. Much like the old prejudices that existed around the brand for so long, I think EV scepticism will linger as well. Their enormous driveway would be perfect for a domestic charger…

Barbecue number two. ZapMap to the rescue again – the Tesco around the corner has the new VW PodPoint chargers installed; they’re only 7kW, but they’re free, and with two hours parking possible I can add some useful range. Nobody is going to turn down free miles! (I did buy some drinks, too, I’m not a total scrounge.)

Even if I treated the rest of the weekend like a Formula E race, there’s enough range to get us through Sunday and back to London now. Like the ID.4, the Enyaq doesn’t feel all that brisk when using more throttle, though that might be the silence as much as anything. And I’m probably missing the point. But the 261hp Enyaq Sportline 80x might be worth investigating. This is a 2.1-tonne car before it’s filled with people and pet paraphernalia…

More visits, more tea, more chat about how big the dog is getting and how many jabs you’ve had. Sounds silly, but without charging concern (I’ve had a few bad experiences) the EV experience is so much more enjoyable. And this is really just the first wave; imagine how much better batteries (and cars; and chargers) will be in five years’ time.

Some time to think, as everyone else is asleep. I like the Enyaq, despite its less than auspicious start. The problem is that, in trying to feel so much like a normal car to lure in EV sceptics, the Enyaq might be in danger of being too ordinary. Whatever your car preference, nobody wants to spend £41,000 and be left with an okay car – do they? The VW at least has funkier looks inside and out to distinguish it. Again, I might be missing the point, but the vRS and (hopefully) Scout should give the Skoda a bit more personality.

Car plugged in (without drama) so it has more than 30 miles before collection. Tried to nip out when rain stopped to collect the car before Belgium v Portugal. Rain started again as I left the door. I’m soaked by the time I arrive, and I’ve brought the wrong key. Alice calls me something rude. Wet charge cables are grim. I’m not electrocuted. Is SourceLondon like expensive fuel? Loads more money for no better performance.

So, an EV can work with public chargers, for sure, but you still need to be lucky – if that Leaf had stuck around the story could have been different. But for those who can charge at home, cars like the Enyaq make the case more effectively than ever more. When that damn screen is working…