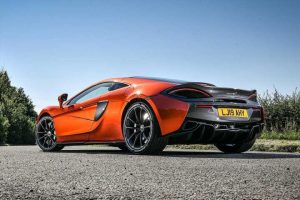 McLaren is almost done with the current Sport Series. Litchfield is not…

Curious things happen when exotic cars age a little and slip in value. They fall within reach of an entirely different group of buyers – some who'll cherish them, others who'll treat them very badly and some who'll waste no time modifying them. The cheapest Sports Series McLaren for sale right now in the PH classifieds is a 2016 540C listed for a whisker under £80,000. That means the buyer who was eyeing up a brand-new Nissan GT-R might be able to afford a lightly-used carbon fibre supercar instead.

Manufacturer warranties expire, originality no longer seems so important… These factors all mean Iain Litchfield's neighbours will soon see a steady flow of entry-level McLarens rumbling through the Tewkesbury industrial estate they share. They'll arrive with less than 600hp but leave with as much as 730hp, presumably at some frightening velocity.

Litchfield's development car is a 570GT, although it came fitted with the more focused suspension from the 570S – a quirk of the McLaren options sheet. Litchfield didn't leave the suspension alone for long. New springs allowed his team to fiddle with the car's ride height. They're also progressive with a softer initial rate to settle the ride quality in normal driving but then, as the spring compresses, a higher rate than standard to improve precision and body control. The springs cost £1,151 (prices exclude VAT).

Wheel spacers increase the track widths by 11mm at the front and 13mm at the rear (£295). They make the most of Litchfield's new geometry settings. He says all McLaren owners should have their wheel alignment checked, commenting: 'It is one of the most cost effective improvements they can make to the car and the improved chassis can be enjoyed at all speeds'. Tweaking the geometry on these cars is a fiddly and time consuming process, but the results should be worth the £250-£400 expense.

Ah yes, expense. If you do want a 730hp 570S or 570GT, you'll pay quite handsomely for it. Litchfield's complete powertrain upgrade package costs £21,387, although it does include new turbos, a limited-slip differential, a Syvecs ECU to replace the standard Bosch system, a completely new exhaust system, all labour costs, dyno tuning and a full engine service. You can buy the parts individually, too. The turbos, for instance, cost £5,995, the exhaust downpipes £1,995 and the system itself £2,995, while the ECU is £4,500 and the LSD £2,995.

Power leaps from around 580 to 734hp, while torque rises from 442 to 584lb ft, with an extra 128lb ft of the stuff available at 3,000rpm. With all that power and torque, Litchfield's 570GT comes close to hitting the magical 500hp/tonne figure that until a few years ago was the preserve of just a handful of hypercars, plus the odd lightweight track cars. Nowadays there are ultra-low volume machines from the likes of Koenigsegg and Tuatara, plus a new breed of electric hypercar including the Rimac C_Two, that match every kilogram of mass with one entire horsepower. Force this 570GT's accelerator pedal to the floor and hold it there for several seconds and at no point as it fires itself along the road so violently you fear it might take off do you long for twice the power or half the weight.

This car still accelerates like a McLaren, only much more so. That means it doesn't explode towards the horizon in one dizzying leap like a 911 Turbo. Instead, the speed builds and builds and builds the way a grand piano falls from the top of a skyscraper, so that by the time the rev counter needle sweeps through 8,000rpm, your hands clamp themselves so tightly around the steering wheel and your eyes are so wide and the tendons in your neck so pulled so taut your closest friends wouldn't recognise you.

There are unquestionably many people out there who crave that sort of performance on the road, but I'm not among them. In fact, far more interesting to me than its sheer power is this car's vastly improved throttle response. From the 540C to the Senna, McLarens don't tend to excel in that area. The smaller 3.8-litre V8 in particular can be irritatingly hesitant – there's classic Eighties-style turbo lag, but also a high-boost threshold that means nothing much happens over the first 4,000rpm.

No problem if you can keep the engine on the boil. On tight roads, though, it's not at all unusual to find yourself in second gear at the exit of a bend wondering when the power might arrive. That makes balancing the car on the throttle very tricky indeed. Ferrari, Porsche, BMW and Mercedes-AMG turbo engines are far sharper.

'The 570GT uses Mitsubishi TD04 journal bearing turbos as standard,' says Litchfield. 'These are the turbos found on Subarus, Saabs and Volvos 25 years ago. They're bulletproof but not exactly responsive. We replace them with modern Garrett roller bearing turbos with billet compressor wheels to reduce weight and inertia, thereby improving response. The upgraded turbos are bigger than the standard ones, which means they have to produce less boost to make a given amount of power. This in turn means they run much cooler, giving us many more tuning options.'

And from behind the wheel? You sense the new turbos puffing away at 2,000rpm and from 3,000rpm they're blowing a gale, giving the 570GT a far broader operating window. You're never left hanging at corner exit. Response is much more immediate as well, making the car so much easier to balance on the throttle. A Ferrari F8 Tributo's twin-turbo V8 feels more responsive still, but I've never come across a McLaren that's as flexible or as immediate as this. Whichever McLaren I owned, I'd want these upgraded turbos.

Unusually for a highly tuned supercar, the exhaust note is quite subtle (Litchfield says he's getting too old for very noisy exhaust systems). Meanwhile, the Syvecs ECU is especially trick, giving Litchfield all manner of toys to play with. 'There's even quicker processing, detailed data logging and more adjustability, and we can even use a proper motorsport traction control system on the engine to intervene faster and more smoothly, with different degrees of slip angle permitted in each driving mode,' says Litchfield. The system was still being fine-tuned when I tried the car, but the potential is enormous.

I'd like to spend more time in the car before commenting on how the various chassis upgrades have influenced its ride, handling and steering. On first impressions the ride feels supple yet tightly controlled in that typical McLaren way, this car never feeling busier or any more punishing than the standard model. I'd like to investigate the LSD a bit more as well, particularly on circuit where, in theory at least, it could make the front end less willing to tuck into a bend. McLarens famously use open diffs with a brake-based system to mimic the effect of a locker.

This plated LSD is a modest 2.4kg heavier than the stock item, which doesn't seem like much of a penalty. On a damp road it clearly improves traction, although with so much power on tap, traction wasn't exactly difficult to break. I think the real advantage of having an LSD back there is that rather than snap suddenly when the torque arrives, the rear of the car steps out much more progressively and controllably. It's a whole new world of interactivity for the McLaren driver, making the 570GT much more Ferrari-ish in that moment when the engine overwhelms the two contact patches as you exit a bend.

Interestingly, this LSD can be fitted to any modern McLaren. Along with the turbos (if not the enormous power increase), I would be sorely tempted. Question is, for your £100,000 or so would you rather have a lightly-specced brand new Porsche 911 Carrera S, or a ferociously fast, tastefully tricked-up McLaren 570GT?