Lifted Porsche 911 With Wooden Wheel Arch Flares Spotted – Is The Safari Coming Back? 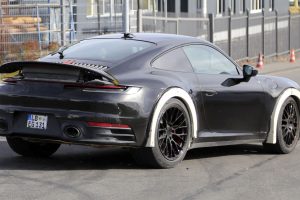 Ladies and gents, prepare to be intrigued. And more than a little confused. What we have here is a very unusual prototype version of the 992-generation Porsche 911, which was spotted at the Nurburgring Nordschleife this week.

It’s likely your eyes were first drawn to the wheel arch extensions, and to save you zooming in, yes, we can confirm they are made of wood. The improvised flares aren’t the only unusual thing about it – the test mule has also been treated to a big bump in ride height.

As for why, we really can’t be sure. Perhaps Porsche is making an unexpected 992 derivative inspired by the old 911 Safari cars – it certainly wouldn’t be alone in referencing those legendary rally machines, with both Gemballa and Ruf doing so with the Avalanche and the Rodeo respectively.

The metalwork under the chunks of wood has trimmed back on this prototype, and it looks to be wearing tyres with fatter sidewalls than the rubber usually found on a 911. Judging by the above video of the quirky 992 in action, it’s most likely packing the 3.0-litre twin-turbo ‘9A2’ flat-six found in the Carrera and Carrera S.

Other items of note include a winged camera unit at the top of the rear windscreen and a rear wiper. The latter element is actually on the 992’s option’s list, but it’s not one you often see fitted.

Want to buy a Porsche? Check out the latest deals on BuyaCar.co.uk

This could amount to nothing, of course – the purpose of this odd 911 may not necessarily be to develop a new production model. Alternatively, Porsche might be working on something quite brilliant.

What do you make of it?