Life with a 2005 Toyota Corolla: Switching from Yokohama to MRF tyres 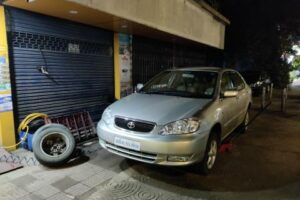 Once the tyres were changed, i feel the fuel efficiency will also improve.

Some weeks ago when I took the car on the highway and went above the speed of 80-90 km/h, the steering would start vibrating. It felt odd as I had never experienced something of that sort before. Nonetheless, I thought it was a problem with the wheel alignment or balancing. So on my return, I drove over to my local tyre shop and had the balancing done. It did sort out the issue temporarily, but it returned after some time.

The tyre guy then suggested that it was most likely the tyres which had gone bad and were causing the problem. It sure was!

The Yokohama Earth 1s that my car was running on was changed by my dad in 2015 and the car had hardly run since then, causing the rubber to go hard and develop cracks on the sidewall. Hence, it needed new rubber immediately, lest the tyres would burst the next time I went on the highway.

After some research and asking the experts, I zeroed in on MRF Perfinzas. The tyre size is 195/65 R15 and I was lucky to get totally fresh new tyres for the car. Once the tyres were changed, it made a world of difference to the car. The improvement felt is phenomenal. Seriously, tyre changing is something that I’d call underrated. Several people I know avoid changing tyres and then complain that the car doesn’t feel right. From here on I suppose the mileage too will improve.

The work was done at Century Tyres Prabhadevi, which is my go-to place for anything related to tyres and alignment.

Here is another thing I’d like to speak about. Firstly, I would like to thank BHPian vigsom who is a literal human encyclopedia of cars and especially of those that he has owned. Most of you would know that he owned two Corollas.

Some time ago when we were speaking, he informed me about a cheap thing that Toyota did back in the day on pre-2005 September Corollas. They did not provide a cabin filter and merely gave a stupid mesh there which was of no use. This was the reason behind cars facing AC problems and also why they began to give it on the facelift cars. Thanks to my then-low usage and maintenance, the AC is in good nick. However, I took this suggestion and put one in for the car ASAP. The filter I got isn’t OEM, but it should do the job.

To leave you with yet another THEN VS NOW pic: That’s it from me for now, until the next update!