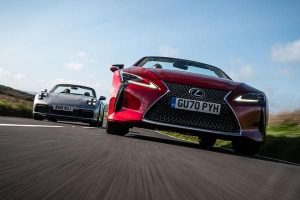 Predictable Porsche, or left-field Lexus? £100k cabrios battle it out

With somewhere around £100,000 to spend on a convertible – you lucky devil – why on earth would that money go anywhere but the nearest Porsche dealership? What rivals there once were from Audi and Aston Martin are now more expensive, the BMW i8 Roadster (for those thinking a more laterally) is out of production and the Jaguar F-Type is best enjoyed in its more affordable P450 trim. There really does seem precious little else to even consider.

And frankly it takes all of five minutes for a 911 to do its thing and render any kind of objective comparison virtually moot. It could probably take on the more expensive R8 and Vantage and give a very good account of itself, such is the 992's unerring and total proficiency. There just isn't a glaring weak spot anywhere in the current Carrera S, from terrific performance to admirable refinement to remarkable efficiency. It is the four-wheeled Achilles; seemingly without vulnerability.

And yet there is a rival of sorts. It comes from Lexus, which is unexpected if not totally surprising. The product plan of Toyota's luxury offshoot swings from sublime to ridiculous like a metronome. The F saloons were inspired; the CT hybrid hatch insipid. The coupe version of the LC500 was flawed but also unforgettable; the ES saloon is one of those things – and most certainly not the other.

So, what to expect from this LC500 Convertible? Because this is not simply the coupe (the hybrid option isn't available) with Lexus's first soft-top. The press pack speaks of "numerous, incremental dynamic improvements" for the 2021 model year in both body styles thanks to "rigorous vehicle testing". That's in addition to a reinforced boy structure to "minimise vibration and flexing" as well as – get this – a lower centre of gravity than the coupe thanks to a soft top arrangement that weighs less than the conventional coupe roof. And you thought it was just for impressing the golf club.

The LC500 proves very early on that the best thing to expect from Lexus is the unexpected. It might not be a conventional rival to the 911 – the 300kg separating them on the spec sheet makes that clear enough – but the match-up doesn't feel so silly when you park them within shouting distance of one another. If the 911 is perfect almost to the point of predictability, perhaps Japanese idiosyncrasy (and ingenuity) can find a way under all that armour?

Both qualities are in ample evidence inside the LC. To the initiated, the 992 is intuitive enough to operate it in thick coastal fog. In the Lexus, everything seems like a challenge. Navigating the touchpad menu is like a game of Operation, requiring all your dexterity not to make a mistake. The roof button is hidden in a cubby. The driving mode stalks are an awful lot like the one that turns the traction control system off. And good luck putting the heated seats on…

Nevertheless, it is put together like a continental shelf. Much of it doesn't make any sense, but it's hard not to marvel at the diligence of the people who constructed it. Almost everything, from door handle to shift paddle, functions as though it were made to last multiple lifetimes. The stereo turns every drive into an open-air concert. Precision and gratifying heft are in evidence everywhere. There can't be a soft-top in the world that operates with so little fuss and so much grace. Lexus tested it through 18,000 cycles (or 24 years of average use) to make it seem that way.

The roof would probably be the car's standout feature if it weren't for the V8. That Lexus persists with a naturally-aspirated 5.0-litre unit when it is hemmed in by so many hybridised vehicles seems baffling. But of course it is the presence of so many electrified alternatives that allows the manufacturer to get away with such an impious engine. And like a coal seam fire in the middle of a wind turbine farm, it does rather make an impression.

Though augmented by Active Noise Control, the soundtrack never feels anything less than authentic. And, roof-down, the driver is exposed to the full orchestra, from induction snarl through to rippling exhaust thunder – it's a real treat. The V8 was undoubtedly of interest in the coupe, but for the convertible its sonic experience is upgraded to virtual USP. Even before driving the 911, prior experience suggests it'll be a Dyson hand dryer in comparison.

However, the same prior experience tells you that the Lexus will have its work cut out matching the 911 on the road. Even turned (there are six drive modes) up to its maximum Sport + setting, the Lexus boasts neither the agility nor the formidable cohesion that the Porsche imprints on anyone who has driven it. The steering is always a little too light for such a chunky car, the 10-speed auto far from the most responsive, and the platform – despite the claims of eliminating flex – is still occasionally upset by whatever is occurring beneath those 21-inch wheels. Add into that the fact that the Lexus isn't tremendously fast (blame a trio of tardiness that is long gear ratios, a two-tonne kerbweight and a just-about-enough torque peak of 398lb ft) and the LC500's appeal starts to take on water.

Characteristically, driving the 911 serves to ruthlessly pull apart what's left. The 992 cabriolet doesn't just impress when experienced back-to-back, it feels like a new benchmark for drop-top sports cars. You know there must be some kind of penalty for losing a roof, but for mile after mile it is brilliantly concealed. This Carrera S seemingly accelerates with the same venom, steers with the same accuracy and corners with a poise so similar that any difference between it and the coupe is rendered meaningless at road speeds. The only notable variance is that the roof can be folded away in 12 seconds at up to 30mph. Doubtless a drive of the regular model would highlight disparities not registered on muscle memory alone, although it's obviously telling that it would even be required – you don't need a spin in the standard LC500 to know that the convertible isn't its dynamic equal.

Does that matter, though? Porsche's achievement in concentrating so much 911 capability into the cabrio is considerable, and anyone with experience of even recent predecessors will be stunned by the way it steers, stops and goes. On the other hand, who buys a 911 convertible – any kind of convertible where there is a coupe equivalent, in fact – for the very best possible driving experience? That's what the hardtop is for. You buy the drop-top for the joy of top-down driving, and there at last the Porsche does betray an exposed heel. Its turbocharged flat-six huffs and puffs, making a nice noise, but not an intriguing one; much as it is nice to look at without ever convincing you that it is irrefutably covetable.

The Lexus, on the other hand, seems born to be a convertible. Of course it looks superb and sounds like all your V8 dreams comes true, but more importantly the dynamic reservations that cropped up in the coupe have largely been expunged. That car was too stiff to be a GT and too heavy to be a sports car; by softening this version off (or so it seems), the LC better occupies its open-top grand tourer niche. It isn't the equal of the 911 to drive, clearly – it's still quite portly, is a chunk slower and only little more refined – yet those aspects become less relevant when you factor in the reasons why you might actually buy a convertible. On the feel-good scale the LC500 is automotive methadone, the world and its issues rendered immaterial as you rumble on by.

Plainly that doesn't prevent the Carrera S romping away from it, its superiority quantifiable on any number of metrics. Short of something boasting a supercar-grade tub, the 992 cabriolet is at the apex of what can be achieved when a car is relieved of its roof; it turns what used to be structural sacrifice into negligible deficit. It is little short of mighty and is no less recommendable than the coupe which spawned it.

Hard then to award the moral victory to something else – but here we are. It might be enough to simply say that the Lexus looks great and sounds better. But it backs those assets up with astounding build quality and a driving experience just engaging enough to earn it passing mention in any discussion of open-top sports and GT cars. Then it doubles down on all of that by also managing to be a welcome reprieve from the gloomy world which surrounds it. And any convertible which can claim to offer a safer guarantee of driver delight in the shadow of a car as deeply talented as the current 911 deserves to find more paying customers than Lexus probably envisages selling to. At the very least, we'd heartily recommend a detour on your way to the nearest Porsche showroom.