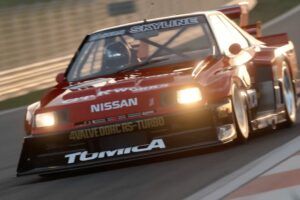 Ever since Gran Turismo 7 launched it’s received mixed reviews from long-time fans of the franchise. Despite stunning graphics and an improved single-player career mode compared to its Gran Turismo Sport predecessor, it’s been criticised for its tedious grind and limited content. Free update 1.19, which rolls out today (Thursday 28 July), might alleviate some of this pain as one of the most iconic Japanese Group 5 race cars, the Nissan Skyline Super Silhouette, will be coming to the game alongside the 1954 Maserati A6GCS/53 Spyder and 2013 Porsche 918 Spyder.

If you’re not familiar, the Super Silhouette class was an FIA Group 5 racing category that existed between 1979 and 1984, and spawned some of the most wacky-looking cars in motorsport. One of these was the Nissan Skyline Super Silhouette which made its race debut in May 1982, going on to take two wins in the same year and five in 1983. This was pretty good-going for Nissan and was part of a period in Japanese car history where the nation’s manufacturers were still proving themselves on the global stage.

The Skyline Super Silhouette, like many of its rivals, looked pretty badass – the exterior was based on the R30 Skyline but incorporated a long front chin splitter, wide, sharp wheel arches, a ridiculous rear wing and turbine-style wheels (a staple of 80s high performance car design.)

Many of these striking aerodynamic features went on to inspire the bonkers ‘Bosozoku’ Japanese modified car scene, with over-the-top wings, chin spoilers and exhausts fitted to enthusiasts’ road cars. We’d expect the GT community to use the Skyline Super Silhouette as a canvas for plenty of Bosozoku-inspired liveries.

Under the shell, though, the Group 5 racer had little to do with the road-going R30 Skyline itself. The body was mounted onto a bespoke tube frame and chassis and was powered by a simple 2.1-litre turbocharged four-cylinder engine with a dual overhead cam head exclusive to the race car. It produced 562bhp (impressive now and monstrous back then) and 397lb ft of torque that went through a five-speed gearbox to the rear wheels.