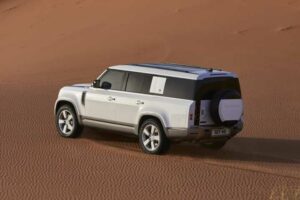 Take a good look at the new Defender 130. Because your initial reaction to that newly extended rear overhang is almost certainly going to govern what you think about Land Rover’s latest attempt to elbow room for itself in a previously untapped market segment. If you think it acceptably well-proportioned – which half the PH office does – then the manufacturer is likely onto a winner, given the very small number of rivals that can claim to seat more than five people in genuine comfort, while retaining the ability to ford a small river. But if you’re in the other camp, Land Rover could be said to have stumbled at the first hurdle. Because who wants an XXL Defender if it looks like a kitchen extension gone wrong?

Either way, you’re probably curious. And you’re right to be. Land Rover has resuscitated the 130 badge for good reason: globally, people are rather partial to very large SUVs, and the novelty of being able to seat eight adults in comfort where previously it could only accommodate seven at a push is going to fundamentally reposition the L663 Defender. In some markets, its additional size will probably not be a significant concern – but for those of us living in Blighty, it’s worth confirming that the ‘elegantly extended’ back end adds 340mm to the car’s length, meaning it now extends to 5,358mm. Which is 36mm longer than the Extended Wheelbase Bentayga revealed by Bentley two weeks ago. By any conventional European measure, this is a big car.

Of course, it is the Defender’s helpfully capacious dimensions – not least its pre-existing 2m of width – that has allowed Land Rover to insert a full-size third row of seats. As expected, the 130’s wheelbase is unchanged from the 110’s at 3,022mm; the transformation is confined to the overhang, which includes a ‘subtle boat-tail-style uplift’ to offer a 28.5 departure angle (compared with 40 degrees for the 110). Aside from this inevitable limitation, the manufacturer claims ‘unparalleled all-terrain capability’ from the larger model. The 130 lineup gets air suspension as standard, which allows for 71.5mm of additional lift at the front (73.5mm at the back), backed by the Defender’s twin-speed transfer box and Terrain Response-marshalled all-wheel drive system.

Mated to a carried-over choice of two petrols (the 3.0-litre, six-cylinder Ingenium in either P300 or P400 spec) or a single diesel (the same-size D300), there’s little reason to doubt the Defender’s landscape-conquering potential – or even its capacity for making decent headway on the road. Land Rover hasn’t provided us with a new kerbweight, but given it has wisely declined to equip the 130 with anything less than 346lb ft of torque, even the lowliest version will crack 60mph in 7.5 seconds. It will also tow up to 3,000kg, and oblige a maximum payload of 750kg – which means you really could fill each seat with a EU-spec 75kg adult and still have change leftover for luggage.

Question is, would you want to? Well, obviously the proof will be in the pudding, but for what it’s worth Land Rover is adamant that the Defender’s ‘familiar outline’ and existing girth has helped it find the room for an ‘uncompromised’ third row. Certainly it appears to have taken the necessary steps to ensure that anyone sitting in the back is not treated like a second-class citizen: when fully kitted, you’ll not only get heated seats, padded armrests, ‘thoughtful’ storage and USB-C connectivity, but also four-zone climate control, stadium seating throughout and a second sunroof above the final row. The manufacturer even reckons getting there is ‘effortless’ thanks to a second row that will ‘slide and fold forwards to provide wide access’.

It goes without saying we’ve heard this sort of thing before (and still bashed our shins on the way to displeasure) but it’s also worth mentioning that the bar for fold-away rear jump seats is generally so low that the 130 will likely be feted if it is merely pleasant enough for two adults, let alone three. Obviously with both rows upright the loadspace takes a significant hit – Land Rover quotes 389 litres – although the additional length means a very healthy 1,232 litres if you keep the boot floor flat, and a downright cavernous 2,291 litres if you jettison all passengers. You can even have the larger Defender as a five-seater if you wish, which would unlock a total capacity of 2,516 litres. But you’d surely have to like the new silhouette very much indeed to countenance that option. Regardless, for anyone keen to put their money where a very large back end is, the 130 is available to order now from £73,895.