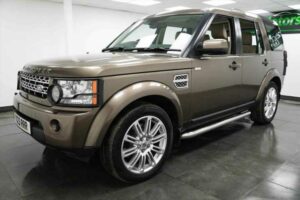 The Discovery 4 was the great. We should get it bronzed

I won’t lie to you; I chose this particular Land Rover Discovery 4 because…I like the colour. How bad does that sound? But I do, because it’s bronze and it’s a bit different. My penchant for wanting things to be different is a legacy of selling cars to people who just kept buying blue, black, sliver and red. I got bored of everything looking the same, so when someone would order an alternative – for example, I remember selling a bronze and a white S-Type, neither of which were popular colours at the time – it made me happy and admire them more. And the S-Type wasn’t even a good car – not the early ones, anyway – but the Discovery 4 was. It’s still an excellent thing today, too.

I know everyone says they fall apart quicker than Boris Johnson’s latest policy defence, and, crikey, I am certainly not going to claim they’re infallible. Far from it. Yet everyone I know who actually owns a Discovery 4 keeps telling me that they’ve not had any issues with it, other than servicing costs and replacing front wishbone bushes, which they appear to chomp through like a mutt through steak.

Who am I to argue? And I did own a Discovery, albeit a first-generation 300 TDI and that never broke down. Most of its electrics failed – the heated seats, both sunroofs, the ABS etc – but it never stopped. Quite literally, sometimes, because when I say the ABS failed, I don’t mean it failed to work, it worked too often; it would come on even when I was braking normally, leaving me sailing towards something (usually solid) in front like I was on a bed of snow.

The Discovery 4 was a far better car to drive than my old 300 TDI, though. Much quicker, for a start, thanks to a lot more power (245hp) and its much more responsive ZF 6HP28 6-speed transmission. It was way smoother, too, having a V6 instead of an antiquated and agricultural inline four. This version, with the 3.0 TD V6, was also far less prone to crankshaft failure than the 2.7 in the Disco 3. It’s still not unheard of, but, by now, you’d expect it to have happened if it were going to. That said, make sure any prospective purchase has a documented history (the advert states that this one does) showing regular oil changes.

It’s also a very comfortable car to bowl along in. Every time you drive a Disco 4 you’re setting an awful lot of mass in motion, thanks to its separate chassis and monocoque body on top, but they all came with plump-ish sidewalls that acted as an extra spring to help out air springs that came as standard on each corner. On which point, check the compressor raises and lowers the ride height as it should, and that the suspension struts aren’t leaking – a common issue that causes the car to lean to one side.

The changes to the dashboard that came with the Disco 4 arguably marked the point at which the model went from being a posh Defender to a true luxury offering, and in HSE trim it comes with all the mod cons. It never lost its way when it came to the heavy lifting, though. If you need a farm vehicle it will go anywhere with the right tyres fitted, and it doesn’t just pull 3,500kg, it’ll pulls 3,500kg comfortably, with the kind of rear-end stability that most cars – most SUVs for that matter – can only dream of. I happen to think that it’s a better-looking car than the original Range Rover Sport, which has exactly the same underpinnings, while also offering the usefulness of seven seats. The bronze ones, like this one, are the best-looking of all, though. Well, to my eyes they are.