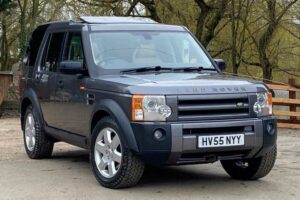 Miss the good old days? This'll take you back…

Even 50 years since the first Range Rover, nothing suits a big Land Rover product quite like a V8 engine. There’s even one crammed into the new Defender. And a BMW-made one coming to the next-generation Range Rover. And also why the old V8 diesel was so popular wherever it was installed, combining effortless performance with fuel consumption (slightly) less ruinous than the petrol equivalent.

The Land Rover Discovery has never been available with the V8 diesel – what a machine that might have been – and while the Discovery 4’s 3.0-litre V6 diesel was a fine motor, the 3 had to make do with the 2.7 version. Which did struggle somewhat with lugging around 2.5 tonnes of Disco. It had a sturdy 328lb ft to accompany around 190hp, but it’s hard to imagine anyone lusting after a TDV6 in years to come, however worthy it once was. The V8, on the other hand…

The 4.4-litre Discovery was a tough sell even when petrol wasn’t approaching £2 a litre. This was the mid-2000s, remember, when diesel was king – with tax and fuel prices to reflect that. The V8 was more expensive to buy and to run than the TDV6, with only a modest – if noticeable – uplift in performance. Its fate was sealed, really, before Land Rover even conceded that only around 10 per cent of sales in Europe would use the engine.

Which isn’t to say it was bad. One review praised power delivery “smoother than a James Bond one-liner” as well as the V8 being “wonderfully resonant up to the 6,000rpm change-up point.” With everything that made the Discovery 3 such a gamechanger for SUVs, of course. As has so often been the case, the diesel made the most sense – but the V8’s charm was plain to see. Even though few sold, it’s easy to imagine some contented owners rumbling around.

This one, unsurprisingly, is the only V8 Discovery 3 on PH. Looks good, doesn’t it? Particularly so given a six-figure mileage, and the fact that the car made its debut almost 18 years ago. As a 55-plated Disco it will avoid the punitive tax applied to cars after March 2006, and the lighter leather brightens up what can be quite an austere cabin. The condition of the wheels, paint and leather suggests this has lived a life of road use; what a way to rack up the miles it must have been.

Now the V8 is for sale at £12,500; far from the cheapest Disco 3 out there, though it is the most affordable petrol-powered Discovery on the PH classifieds – if that helps your cause. (Of the 945 currently for sale, just 20 aren’t diesel, or a little more than two per cent.) Of course a V8 Discovery is going to cost a small fortune to run; it always has and it always will. But every mile would likely be a satisfying and memorable one. Especially when you’re surrounded by ditch water-dull battery-powered SUVs. Just remember to ask your passengers for petrol money.