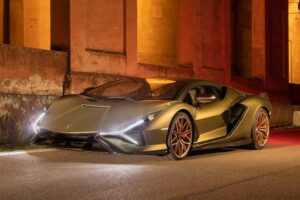 Lamborghini’s first-ever production electric vehicle is on track for a 2028 launch, facilitated partly through tech borrowed from the wider Volkswagen Group. But don’t be fooled into thinking that the raging bull is giving up on the combustion engine entirely within the near future – Lamborghini wants to keep it alive for as long as possible.

Lamborghini says that the upcoming EV will exploit the benefits of electric technology in ways a traditional ICE engine would not be able to. For example, an electric drivetrain allows for better individual wheel speed control that could improve driving dynamics and please long-time fans of its cars, with Lambo’s chief technical officer Rouven Mohr quoted by Car Throttle sister title Auto Express as saying “I’m not worried that someone will complain!”

Before it arrives in 2028, however, Lamborghini already has plans for other electrified models in hybrid and plug-in hybrid form. In early 2023, a hybrid replacement for the Aventador will arrive, and a plug-in Huracan successor is on the cards for late 2024 alongside a plug-in version of the Urus, meaning the entirety of Lambo’s range will involve some form of electrification.

While you might expect this to be a stepping stone towards full electrification of all of the brand’s models, Lamborghini swears this isn’t the case. Stephan Winkelmann told Auto Express that synthetic fuels may play an important part in Lamborghini’s future, especially given stablemate Porsche’s huge investment into their production.

Winkelmann says that he wants the brand’s models to stay hybrid “for as long as possible”, but that nothing is set in stone as of yet. He added that, following the electrification of the brand’s entire lineup by 2025, “we need to take a decision then.”

Synthetic is likely not the answer for the vast majority of car owners, though. Mohr expects that their use will “remain a kind of niche”, given how expensive they tend to be. For that reason their application will probably stay the preserve of high-end sports cars and motorsport, so likely not a long-term choice for your clapped-out old Vauxhall Corsa…