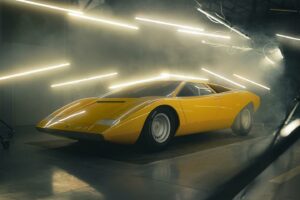 Hats off to Lamborghini this week. On Wednesday we were thrilled to learn that the National Historic Vehicle Register in the US had deemed the Cannonball Run Countach worthy of preservation; now the manufacturer has just revealed the ground-up remake of the LP 500 ‘idea car’ it used to introduce the world to the Countach shape at Geneva in 1971.

The new car is a product of Lamborghini Polo Storico, the division formed in 2015 to ponder all things historical when it comes to Sant’Agata Bolognese. Naturally its duties include picking up the phone to important collectors, which is exactly what it did back in 2017, to a chap who wondered if a reconstruction of the original LP 500 might be possible.

The request was evidently a tricky one because, despite the show car’s instantaneous fame (imagine seeing a Countach in 1971; in January of that year, Britain was still using shillings) three years of subsequent development saw the model change significantly, and meant the LP 500 was eventually sacrificed to crash testing in 1974. Which was obviously par for the course, but somewhat unfortunate given the car’s historical significance.

Consequently, Polo Storico spent months just on analysis – even going so far as to question the original engineers and pester Pirelli into recreating the original tyres – all so that the form and function of every detail would be as accurate as possible. This included recreating the chassis (which was unlike the tubular frame used for all other versions of the Countach) and the bodywork, which was eventually hand-beaten in the traditional Italian way.

The result, naturally enough, is fairly spectacular. Presumably a contemporaneous V12 was less tricky to deliver – Lamborghini notes that all mechanical components were either sourced from original spare parts or restored components or simple built from scratch – but plainly the LP 500 is a true one-off, and a labour of love (and no little money either). In keeping with its show car origins, Lamborghini has entered it into the class reserved for concept cars at the Concorso d’Eleganza Villa d’Este. Which is a nice touch.

“The Countach reinvented high-performance cars,” commented Stephan Winkelmann, Lamborghini’s CEO, “and it became an icon in terms of stylistic language that even today, after decades, still inspires contemporary Lamborghinis. Bringing the reconstruction of the first Countach to the concept class of the Concorso d’Eleganza Villa d’Este, in the year we are celebrating the 50th anniversary of this model, is something extraordinary because it allows us to admire the legendary 1971 LP 500 in person for the first time in so many years.”