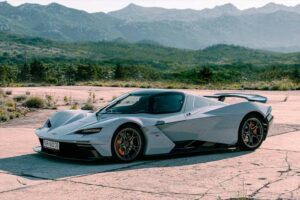 If perhaps not as well-known as some other series, European GT2 isn’t without some incredible cars, from the Audi R8 GT2 and Brabham BT62 and Porsche 911 GT2 to upcoming MC20 GT2. Now one of the entrants is to become a production reality, with KTM’s stunning X-BOW GT2 becoming this, the GT-XR. KTM believes it’s the closest thing possible to a racer in a road legal car; “the super sportscar is the ideal lightweight and high-performance car for true individualists who want to experience untamed dynamics, radical design and pure enthusiasm in their everyday lives as well”, reads its press release.

In true KTM fashion, the XR is properly extreme. See the jet fighter style canopy to get in, for starters. It’s also carbon tubbed and weighs 1,250kg at the kerb, which means it’d be fast whatever the powertrain. But the new X-BOW has Audi’s venerable five-cylinder turbo and seven-speed DSG nestled in there somewhere, so it’s going to be seriously rapid. With 500hp and 429lb ft, top speed is rated at 174mph. Even with just rear-wheel drive, acceleration is likely to be fierce. KTM says the 2.5 is ‘more compact, lighter, more efficient, and at the same time more powerful than comparable engines.’ So there.

Lots of power, lots of carbon and not much weight was largely to be expected, however. As were motorsport touches like aluminium monobloc brake calipers, a carbon seat and an AirCurtain to further improve aerodynamic performance. What’s less familiar from KTM are concessions to everyday use. This GT-XR comes with bespoke fitted luggage as an option for the 160-litre boot, there’s electric power steering, air-con, a rear view camera, Bluetooth and USB-C charge sockets. KTM says the X-BOW GT-XR has a 1,000km range, no less, thanks to a 96-litre tank and an official claimed 31mpg. And Silverstone to the Nurburgring is less than 800km…

Only around 100 X-BOWs have ever been made across R, RR, GT4, GT, GTX and GT2 variants, so the GT-XR is likely to remain very rare. But what an awesome thing it looks like being for those who are bored of the usual track car suspects. A handbuilt, carbon tubbed supercar that looks like this with genuine motorsport breeding will always be right up our street, especially when powered by a cool engine. KTM is accepting orders for the X-BOW GT-XR now, with prices from €284,900 (£245k) plus local taxes; 20 per cent VAT here would make a little less than £295,000. An XR in the UK is a viable option, too: “By means of European small series approval, the vehicle is available and approved for street-legal use throughout Europe.” Be one heck of an arrival at a track day…